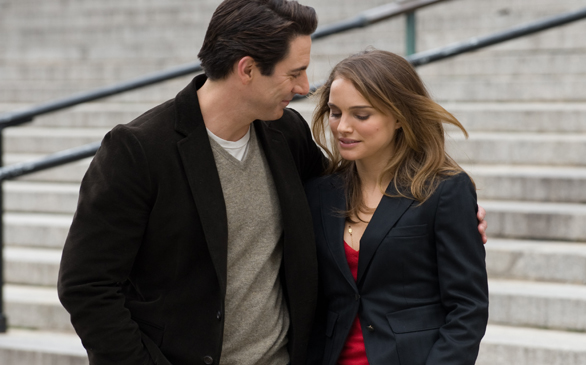 Scott Cohen and Natalie Portman in The Other Woman
(Credit: Barry Wetcher)

It’s official: Natalie Portman is, quite literally, everywhere. In theater four she is shattering mirrors and doing crazy pirouettes as a self-possessed ballerina, while in theater seven she is passionately making out with Ashton Kutcher in a hospital storage room. And soon, she will also appear in theater 10 as Scott Cohen’s second wife holding a little boy’s hand. With her strong performance in The Other Woman, Portman once again proves to the world that there is absolutely no role she can’t bring to life.

The Other Woman is a truly heartbreaking chronicle of a woman trying to balance her own needs to get over her grief of losing a child and her obligation to hide her feelings in order to protect others. Jack (Cohen) divorces his wife Carolyn (Lisa Kudrow) and marries Emilia (Portman) when he finds out that she is pregnant with his child, who dies shortly after her birth. Although Emilia has not quite recovered from her shock, she must take care of Jack and Carolyn’s son, William (Charlie Tahan). She is constantly struggling to be a good mother to William, but her emotional instability steps in from time to time and prevents her from paying full attention to him.

In contrast to her previous films such as The Other Boleyn Girl or Black Swan, this movie does not have a climactic ending or a conflict resolution. It is rather a process, an ongoing story filled with small yet significant details: Carolyn’s hateful comments, William’s childish words and Emilia’s hidden photos of her lost child. From beginning to end, Emilia’s fear and frustration are visible in her voice, actions and facial expressions, openly inviting the audience to reach out their hands and touch her inner scars.

The basic plot of the film mainly deals with the complicated web of different relationships between Emilia, her father, Carolyn, Jack and William. It is unfortunate that some of these relationship issues remain unspecified or unresolved. For instance, the film fails to adequately address the irony of Emilia marrying a man who cheated on his wife when she herself has issues with her cheating father. Characterization of Carolyn also seems unfair in a sense that she is portrayed as solely an antagonist when she is also a victim who lost both her husband and her son to a stranger overnight.

Overall, the film itself was well structured, and another brilliant Portman performance is enough to move the audience’s heart. If you are searching for a quiet quality movie amongst blockbusters and romantic comedies, The Other Woman fits the bill.


The Other Woman releases in select theaters Feb. 4.
Article posted on 2/2/2011
This article has been viewed 1629 times.