Lakers in Search of Identity 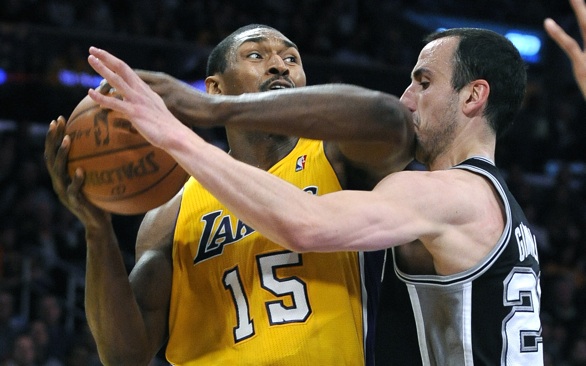 The Los Angeles Lakers are now 0-5 against the top teams in the NBA, with their latest defeat coming at home on Feb. 3 to the San Antonio Spurs at the Staples Center. Although the Lakers lost the nail-biter by a score of 89-88, there is still a lot of reason for concern and reflection. Los Angeles is 0-2 against San Antonio thus far this season, and 0-3 against the Dallas Mavericks, Boston Celtics and Miami Heat.

For the night, both the Lakers and Spurs played solid defense, but forward Antonio McDyess’ buzzer beater sealed the deal for the visitors. He finished the game with eight points, eight rebounds and five assists off the bench.

“I was in the right place at the right time, and it bounced right to me,” McDyess says. “I haven’t had too many buzzer beaters. I can probably count them on one hand, but this is a big one.”

“Tony was great,” Spurs head coach Gregg Popovich tells the media after the win. “He kept us together like he has all year long and just did a fantastic job.”

The Lakers really did not begin the game well after being down 22-18 at the end of the first quarter. Yes, they did play good defense in limiting the Spurs to just 22 points, but the Lakers could not surpass the 18-point plateau. This hurt them in the end because in every other quarter the Lakers scored 21 or more points, including 25 in the final quarter.

“It feels a lot better to have a chance to win the game than to lose by 10-plus points,” Gasol says. “It’s tough when you’re struggling. We’re hitting the road, and we’ll have an opportunity to get it together and get back on the right track.”

Kobe Bryant nearly had a triple-double with his 16 points, 10 assists and nine rebounds.

“It was an ugly game. When you’ve got two good defensive teams, for the most part it’s going to be that way,” Bryant states to reporters. “I think both teams didn’t shoot the ball particularly well. They shot it better in stretches than we did. We gave ourselves an opportunity to win the game, but they just got a great bounce. It bounced right to him.”

Lamar Odom powered through with 16 points and six rebounds, and center Andrew Bynum had a double-double of 10 points and 10 boards to go along with a career-high six assists. In addition to that, Ron Artest’s physical, defensive presence gave a spark. Artest finished with 13 points, five rebounds and two steals in over 40 minutes of play. His minutes have risen since Matt Barnes’ injury.

Another factor in the game was the Lakers’ inability to connect from deep; they made just two three-pointers out of a total of 14. They recorded a 42.5 shooting percentage from the field and a 44-38 edge in rebounds, but it was just not enough against a San Antonio squad who looks better than ever.

“Too many opportunities at the end of the game,” Lakers head coach Phil Jackson says. “Four attempts cost us. It was a good game. Defensively, we played well.”

However, the Lakers did bounce back after losing to the Spurs. They defeated the New Orleans Hornets on Saturday, Feb. 5, 101-95. Gasol posted 34 points and 10 rebounds, while Bryant had 32 points, nine rebounds and five assists.

“I’m always in attack mode, and it’s my responsibility to recognize things on the team that can help us,” Bryant says. “I felt like it was time to kind of have a talk with him [Gasol] and tell him it’s OK to be selfish because that’s really what we need from him.

Their seven-game road trip continues. Up next for the two-time defending champion Lakers is a trip to Memphis, Tenn., as they visit the Grizzlies for a 5 p.m. start today. They will not play again until Thursday, Feb. 10, when they travel to Massachusetts to battle the Boston Celtics.