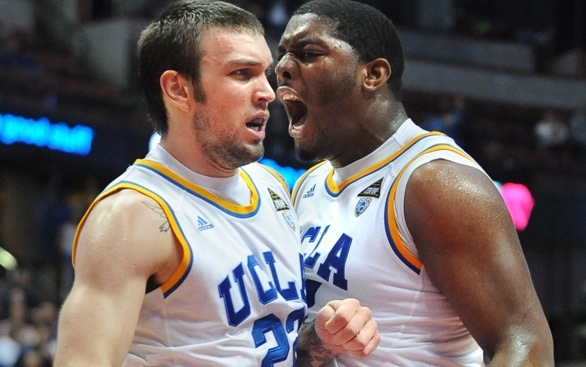 A solid defensive effort resulted in the host UCLA Bruins topping their visiting crosstown rivals, the USC Trojans, on Feb. 2 at Pauley Pavilion in Westwood before 10,419 fans. UCLA’s 64-50 victory came as they ended a four-game losing streak to USC (12-11, 4-6) and avenged an earlier season loss.

“We knew they had a little run and winning streak on us. And we knew this was going to be a big game, not just for the rivalry but because we’re still trying to get in the run for the Pac-10 title,” UCLA junior guard Malcolm Lee claims. “We knew this was a big game, and we came out to work hard.”

After rapidly making noise in the conference’s standings earlier this season, the Trojans seem to be downgrading on the court, and UCLA’s night to gather a win against them arrived.

“We knew they were going to play with a sense of urgency having beaten them four times in a row,” USC head coach Kevin O’Neill says. “We didn’t get enough stops in the first half to put us in a position to win.”

The Trojans trailed by just one point at halftime, but were only limited to 15 total points in the second half. UCLA’s defense became a dominant force throughout that time.

“We had a little stretch there at the end when we couldn’t get a basket to go down, missed a bunch of free throws,” O’Neill states. “We just don’t have enough as it stands right now.”

Freshman center Joshua Smith showed skill and poise in the pivotal Pac-10 affair. Smith collected 15 points and six rebounds off the bench, while aggressively pounding his body on both the defensive and offensive side.

“We were excited,” Smith remarks. “Any time you play your rivals at home and you win.”

For UCLA, Lee was the only other Bruin in double figures with 13 points; 11 came in the first half. Sophomore forward Reeves Nelson contributed eight points and 11 rebounds, while junior guard Lazeric Jones added nine points, five rebounds and five assists.

“We knew this was going to be a big game, and we just came out hard,” Lee says. “We just kept our minds in the game.”

Nevertheless, Nelson’s defensive play did not come without proper recognition from this coach.

“I was so pleased with Reeves’ defense because he was one-on-one and he wanted that challenge,” Bruins head coach Ben Howland says. “He accepted us and did a great job for us.”

As a unit, the Bruins shot a whopping 48 percent from the field, making 24-of-50 shots. However, their ability to retrieve more rebounds (38-24) than the Trojans probably played a significant part in the outcome, especially since 11 were on the offensive end.

“That was a great win for us. Our defense tonight hurt us at times, but at the end of the day, we held them to 39 percent shooting,” Howland says.

Vucevic created several dilemmas for the Bruins the entire 40 minutes of play, but Nelson shut him down when it counted the most, including the final six minutes of the game. “We didn’t box out well,” Vucevic says. “After they took a shot, we just looked at the ball, and they came in aggressive and tried to get rebounds. That’s been one of our weaknesses.”

UCLA led for almost the entire contest, but their first double-digit edge came nearly at the four-minute mark of the second half.

“Everybody did their job,” sophomore forward Tyler Honeycutt says. “Defensively, we did a great job of holding them to 15 points in the second half. We passed the ball well and did a good job rebounding.”

The Bruins host the Oregon Ducks Feb. 10 at 7:30 p.m., while the Trojans are scheduled to entertain the Oregon State Beavers on the same night but at 8 p.m. at the Galen Center.