Spokes: Everyone I Ever Met 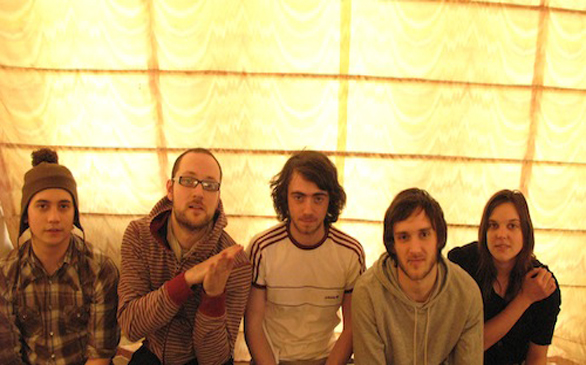 Why is it that so many great English bands hail from Manchester? The hometown of everyone from the Hollies to Joy Division to the Chameleons to Oasis never seems to lose steam as it churns out one influential after another. An expat friend of mine says it’s because it’s “grim up north.” I’ll take him at his word, because the music seems to speak for itself.

Spokes’ Everyone I Ever Met is one of the newest in a long tradition of fantastic offerings, and they stand up to the Mancunian reputation seemingly with ease. Their dreamy, string-laden brand of indie pop is nothing short of majestic.

Please note: Due to lack of band member credits on any information I was able to drudge up, names are foregone here. I can’t help it, they’re enigmatic.

“3 4 5” is atmospheric with an interplay between driving drums, fluid strings and chiming guitars and some lovely female backing vocals in contrast to the male lead vocalist’s mellow croon. The track rises to a breathtaking crescendo by the end.

“We Can Make It Out” features tribal drums and group chant carried on soaring strings. This song is pure energy that offers nary a breather until its finale when it collapses into an uneasy calm, like the eye of the storm before rearing its head one last time.

“Everyone I Ever Met” is haunting, blending moments of shoegaze with pure aggressive rock. “Sun It Never Comes” is melancholy and subdued with its simple acoustic guitar and subtle vocal performance. “Give It Up To The Night” is equally gorgeous, piano and strings holding up an understated play between male and female vocals.

“Peace Rocket” reminds of Arcade Fire with its complex layers and emotional delivery. “Torn Up in Praise” starts with a din of guitar racket, which acts like the earthquake that births the tsunami; the energetic wave that emerges is heavenly.

“Happy Needs a Colour” shows off Spokes’ remarkable talent with the kind of compositional prowess one would expect out of a Ryuichi Sakamoto but probably not your average indie ensemble.

The closing tracks, while again demonstrating the group’s diversity, might as well have been saved for B-sides, as the album doesn’t benefit too tremendously from their addition. They’re good but don’t quite stand up to the bar that is set by the preceding songs.

Everyone I Ever Met is impressive. Let’s hope they’ll cross the pond and wow us with their live show. If this release is any indication, seeing them in the flesh must be explosive.

Everyone I Ever Met is currently available.