“The Capulets and The Montagues”: Now-Feb. 27 @ New Place Studio Theatre 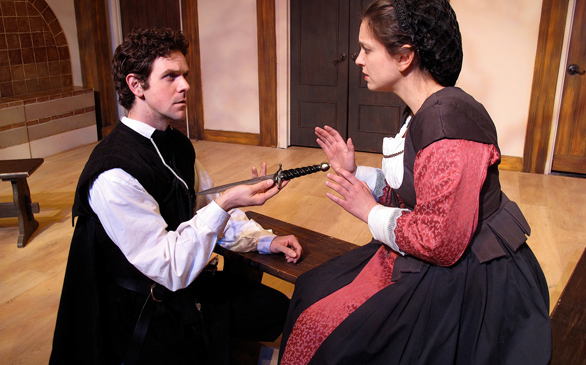 We all know the story. “Romeo and Juliet,” star-crossed lovers torn apart by family rivalry, only bound together through death. Yes, Shakespeare’s play is definitely a tragedy, as we all know it. But step into the New Place Studio Theatre in North Hollywood with this version of the play in mind and be ready to be in for a big surprise. Produced by Dakin Matthews and directed by Anne McNaughton, the Andak Stage Company presents Lope de Vega’s “The Capulets and the Montagues.” With the same source story, Lope de Vega introduces a different perspective to the austere play by Shakespeare.

This particular play turns the tragic lovers’ tale upside down and inside out. Be ready to laugh at the topsy-turvy play and the ridiculous thought processes of the characters. Only devastated for seconds from the sad fate of Romeo and Juliet, you will find yourself laughing, or rather snickering at the stupidity (in my case), throughout most of Vega’s comic twist. He skillfully manages to transform the tragedy into a comedy. Taking a pair of tweezers, he molds the plot here and there to end the play with a happy ending.

Vega shows the unexpected and randomness in the actions of the characters who strive so vigorously to solve their problems. A bit weird, I know. But if you like the unexpected, it is rather an enjoyable play.

With great use of stage space and actor recycling, this production succeeds in staying as true to the original Spanish script. And yes, some of the content may be a bit gross to the modern audience, but go ahead and ignore that weird feeling in your stomach. Instead, laud the actors for their enthusiasm and energy. Imagine the location, the nonexistent background noise and the imagined hoards of people in each scene in combination with the actors and maybe, you may find yourself quickly immersed into Vega’s playful world.