Cause And Effect: Rise Against Speaks Out, Not to be ‘Fashionable’ 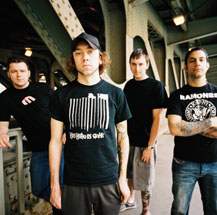 From the moment singer/songwriter Tim McIlrath belted his first chords nearly six years ago, it’s been a loud and clear warning that Rise Against is a band not to be ignored. While 2004 marked the return of punk rock to politics, Rise Against has been screaming at audiences to wake up and get involved since the group first formed.

As the band came together in a Chicago basement at the end of 1999 – McIlrath, bassist Joe Principe, original guitarist Dan Precision and drummer Brandon Barnes – Rise Against always had a clear vision of what they wanted to do musically. Not only did they want to bring back a style of hardcore music that seemed to be lacking in the Chicago punk scene, but they also sought to make music that would cause people to stop and think.

"There’s so much negativity in the world and things to be angry about," McIlrath says. "But through all the negativity, our goal is to create music that offers hope and inspires others."

Through the intense amount of energy the band evokes with its melodic hardcore sound and angst ridden lyrics, anyone who has seen the band knows the current buzz surrounding Rise Against is legitimate.

In fact, it’s hard to imagine when Fat Mike – founder of record label Fat Wreck Chords and singer/bassist for NOFX – first heard Rise Against, he initially passed on offering the band a record deal. Ultimately, the band was given a second chance and things progressed quickly for them.

In 2001, the band debuted with The Unraveling for Fat Wreck Chords, followed by Revolutions Per Minute in 2002. With a jump to major label Geffen in 2004 with Siren Song of the Counter Culture, Rise Against was faced with a fair share of both criticism and praise.

"We certainly felt a lot of pressure riding on us with this last record. It’s only instinctual and natural," McIlrath says. "But as soon as you allow that pressure to seep in, it’s easy to ruin the music. We don’t live in fear of being dropped from our label. We love what we do and will continue to do it, no matter what."

As Rise Against fought off its share of adversity from critics and fans alike who worried that the move to a major label would hinder their artistic integrity, Rise Against hit the road, proving wrong those who doubted them.

"We will be touring pretty much the rest of the year until we take a break to start working on our next album," McIIrath says. "Our last album was really rushed; this time around we plan on spending more time with it."

Meanwhile, Rise Against has been actively supporting various causes such as PETA, Punk Voter and most recently Control Arms. With the resurgence of politics in music within the last year, McIIrath recognizes that it has become "fashionable to be a political band."

"There are a lot of crappy bands out there who are very hypocritical, but that’s not what we are about," he claims.

Although Rise Against’s members have differing political opinions, the band actively supports causes they can all agree on and speaks out on behalf of them.

"People seem to forget that politics are the basis of punk rock (and) people always find the need to categorize you," McIIrath says. "We are not like Bad Religion, where politics is the very essence of their being. We are about many different things. Politics just happens to be one of them."

More recently, Rise Against appeared in the film Lords of Dogtown – the fictionalized story of the rise of modern day skateboarding – as punk legends Black Flag. When the band was initially approached to do the movie, they turned down the offer. It wasn’t until they found out that fans had voted to see them in the movie that they agreed to do the film.

"Because of the circumstances, it was a big honor. But Hollywood is not our thing and it’s not something that we will ever do again," says McIIrath. Now how punk rock is that?

Siren Song of the Counter Culture is currently available. Rise Against will perform July 17 at the Glass House in Pomona, July 20 at the Wiltern LG in Los Angeles and July 21 at the Ventura Theatre. For more information, visit www.riseagainst.com.