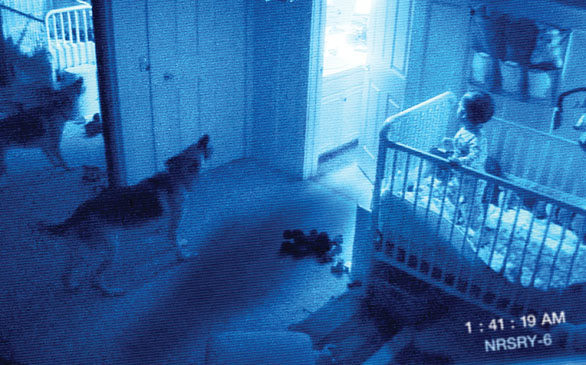 The Horror! The Horror! Paranormal Activity 2, a prequel to the original, ups the stakes of the first film. A couple with a newborn baby finds their home completely trashed. Thinking they have been vandalized, they set up security cameras throughout the house, only to find a demonic presence is terrorizing them.

The infamous cult film I Spit on Your Grave (1978) comes to Blu-ray along with the 2010 remake. Is it the ultimate feminist film or depraved exploitation? Whatever your take, there’s no denying the film’s visceral impact. After being raped and left for dead in the woods, a young woman takes merciless revenge on her attackers. The film is on the shortlist of films you have to see. Check out the remake for a slicker, less raw alternative.

Horror legend Wes Craven returns behind the camera for My Soul to Take. A group of teens that were all born on the day a serial killer vanished start turning up dead.

The Majors: A depressed teenager (Keir Gilchrist) checks himself into a mental hospital in the coming-of-age comedy It’s Kind of a Funny Story. He forms a bond of sorts with his fellow patients, played by Zach Galifianakis and Emma Roberts. Jim Gaffigan and Lauren Graham are his parents. It was written and directed by the creative team behind Half Nelson.

Katherine Heigl and Josh Duhamel are the proverbial rom-com couple who can’t stand each other in Life As We Know It. When the mismatched godparents find themselves the guardians of orphaned Sophie, they get a crash course in parenting and each other.

Tyler Perry gets serious with For Colored Girls, an adaptation of the play featuring 20 actresses performing poems about life as women of color. The cast includes: Janet Jackson, Thandie Newton, Whoopi Goldberg and others.

Stephen Frears directed Tamara Drewe, an adaptation of the graphic novel, which is a reworking of Far from the Madding Crowd.

The Vault: The great Elia Kazan adapted his own book, America, America, about his uncle who fled persecution in Turkey with dreams of a new life in America. This previously unavailable masterpiece was Kazan’s favorite of his long and fruitful career.

Blu Notes: One of Federico Fellini’s greatest achievements, Amarcord (Criterion Collection) is a colorful and nostalgic remembrance of the Italian master’s childhood that continually surprises and delights with oddball humor and larger-than-life characters. Bonus features include archival interviews, a documentary on Fellini’s homecoming, deleted scenes and more.