The Eagle: Channing Tatum soldiers on. 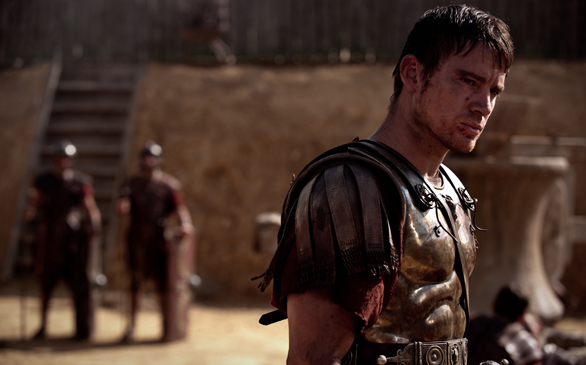 When Channing Tatum sidles up to a table at the Beverly Hilton hotel to discuss his new film, The Eagle, an adaptation of the 1954 historical adventure The Eagle of the Ninth, there’s barely a glimmer of the studly street rat persona that first caught Hollywood’s attention in films like Step Up and A Guide to Recognizing Your Saints. Wearing a crisp, black, button-down dress shirt and well-fitted slacks, Tatum sports a bit more weight than he did as Marcus Aquila, a Roman soldier in 140 A.D. searching to discover the truth surrounding the disappearance of his father’s legion in the north of Britain, but that gravitas isn’t just physical. Tossing out references to film performance in “the first quarter” and explaining complex marketing strategies, Tatum’s business savvy is as prominently on display as his body while sporting a period-appropriate loincloth.

Throughout 2011, Tatum has four films scheduled to open and is waiting the imminent start of 21 Jump Street, which will be his first time as a movie’s star and executive producer. The actor, who recently founded his production company, 33 and Out, which backed the low-budget ensemble piece, Ten Year, admits he doesn’t have much of a career strategy, simply a desire to make great films, but he does have very clear criteria for picking his projects.

“Either you read a story that you love, it’s a filmmaker you want to work with or it’s character you have to play,” he explains. “They’re all important. But, for me, it’s always filmmaker and then character. If you don’t have a great filmmaker, you will not have a great film. The film is a direct mirror of the director.”

Making The Eagle, Tatum had the chance to work with Oscar-winning documentarian-turned-narrative filmmaker Kevin Macdonald (One Day in September, Touching the Void, The Last King of Scotland).

Following the director as the most important element of the equation was character, in this case another soldier, a part the young actor has played frequently in the last three years, and one he feels quite comfortable inhabiting.

“It comes from what I respect,” he offers, “and that probably comes from my parents. They do not lie. If my dad doesn’t like you, you’ll know. And my mom is too innocent to lie. She doesn’t even cuss.”

Filming also gave Tatum the chance to live out a childhood fantasy.

“Braveheart and Gladiator are two of my favorite movies of all time,” he gushes. “Those are my Star Wars!”

Co-starring with Tatum is Jamie Bell, whom audiences came to know and love as a young boy in Billy Elliot. Now that he’s all grown up, Bell gives Tatum a serious run for his heartthrob money as Esca, Marcus’ slave and confidante.

“Jamie says so much without saying anything!” Tatum grins. “He’s so smart. He has so much going on inside that it just oozes out of him, but he’s witty and hilarious. I want him to do a comedy!”

Considering the extensive dance background both men have displayed in the disparate flicks Billy Elliot and Step Up/Step Up 2: The Streets, one can’t help but wonder if their training helped them with fight choreography.

“Absolutely,” Tatum nods. “Dancing, you have to know spatial movement and it’s steps; knowing how close you have to be, how far away. When you have an ax that has to be in the right place with the camera and everything, it’s a dance – a dangerous, more violent dance where you have to stick a sword in someone’s throat.”

Despite three more films on his slate, along with a possible sequel to G.I. Joe and a rumored cameo is the fourth Step Up film (“Ha! I’m not opposed. But they would have to come with a pretty hefty number,” he laughs.), Tatum admits that a break may be in his future.

“I do want to take some time, try to reinvent, get better and maybe get behind the camera a little more,” he says.

The Eagle releases in theaters Feb. 11.