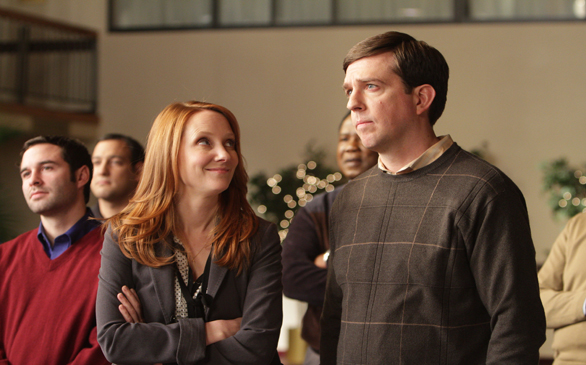 Do you remember that awkward kid sitting next to you in high school? Or the socially awkward kid who tries so hard to fit in with the cool kids and ends up losing him/herself? Or the lesson Cady Heron (Lindsay Lohan) learned in the movie Mean Girls? If you watch the hilarious new comedy Cedar Rapids, you will see a combination of that awkward kid, the wannabe and Cady Heron from Mean Girls.

Tim Lippe (Ed Helms) is an insurance agent in a remote area in Wisconsin, known as Brown Valley. Tiny and tranquil, the town is filled with overly friendly people that know each other from head to toe. Lippe has never been outside the protective bubble of this town until his insurance company feeds him to the lions by sending him on a mission to an insurance convention in Cedar Rapids, Iowa.

Lippe is the sort of person who has aged physically but never had the chance to mature emotionally. In love with his seventh grade teacher, who is only in it for the fun, Lippe even fails to be more modern than his childhood teacher. Lippe never really knows how to kick it with his friends – he does not even seem to have any friends.

This is about to change when he meets Dean Ziegler (John C. Reilly), Joan Ostrowski-Fox (Anne Heche) and Ronald Wilkes (Isiah Whitlock Jr.). The three take him through the jungle of chaos behind the seemingly serious and uptight convention, and introduce him to the inner party animal that resides in him.

Lippe, humorous because of his inability to pop the bubble of his childhood, is naïve yet righteous, and warm hearted in a world of deceit, backstabbing and gossip.