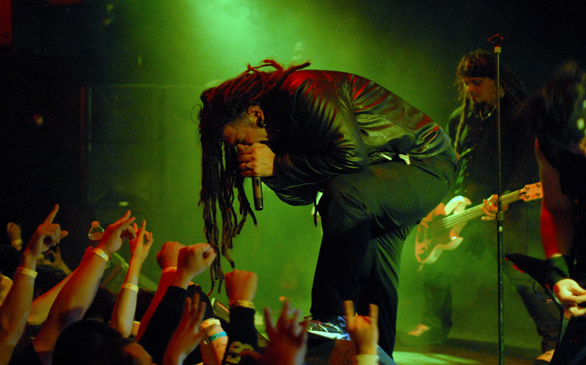 Currently promoting their fifth studio album, Dead New World, Latin metal band Ill Niño stormed into Los Angeles embracing a massive ovation. The band took the stage while fog machines filled the venue and the floor quivered from distorted vibrations. Everyone erupted with excitement as the six-piece prepared the masses for complete chaos and destruction.

Lead singer Cristian Machado instantly pleased the crowd by starting the setlist with “If You Still Hate Me” off their first record, Revolution Revolución. Bodies collided with intense energy as mosh pits scattered across the floor.

Guitarists Ahrue Luster and Diego Verduzco provided the aggressive tones everyone craved with their distorted melody shredding. Bassist Lazaro Pina supplied heavy bass lines that caused the walls to shake. Dave Chavarri sat behind a massive drum set as he channeled every fiber in his body to create towering beats. Percussionist Daniel Couto added thick Latin layers into each song as he completed the lineup on stage.

The 16-song setlist included material from all five albums. Singer Machado interacted with the crowd by extending his hand over the audience as everyone jumped to make a connection. As they performed “Rumba,” everyone burst with joy as some sang in unison. Combining Spanish lyrics into their music didn’t faze the crowd as the group’s large bilingual following shouted each verse.

Machado continuously informed the crowd to move their feet as they played “God Is for the Dead” off their latest record. Every song expelled disorder across the floor as VIP guests climbed onto their tables while the raw energy spilled across the air.

As they walked off stage, everyone shouted “Otra, Otra, Otra” as the crowd pleaded for an encore. They rewarded the masses by closing the night with fan favorite “How Can I Live,” while gifting a few with drumsticks and guitar picks.