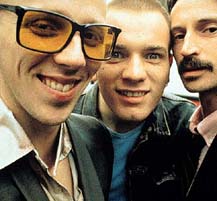 Before playing lighter (and, arguably, bad) roles in mainstream hits like the Star Wars prequels and Down With Love, Ewan McGregor took a surprising turn as Mark Renton, a morally bankrupt 20-something with a “sincere and truthful junk habit,” in the 1996 drug film Trainspotting.

Based on the novel by Irvine Welsh, Mark is disillusioned by the trappings of the cookie-cutter “successful” life – the right career, a house, a family and all the washing machines, fancy cars, big televisions and everything else that supposedly goes along with it. He chooses to run with a gang of like-minded heroin junkies and depraved individuals in urban Edinburgh and lead a life more fulfilling… or so he thinks. His circle includes Sick Boy (Jonny Lee Miller), the bumbling Spud (Ewen Bremner) and the insane Begbie (Robert Carlyle), as well as his girlfriend Diane, a sassy14 year-old schoolgirl with a wild side.

Mark alternates between states of delusion and withdrawal and the audience follows him through moments of surreal, drug-induced hallucinations (including one involving the “worst toilet in Scotland”) and painful clarity. He and his friends go from the highest of highs, sometimes for days or weeks on end, to the lowest of lows, including a shocking scene after a particularly long heroin trip in which they find out what happens when Sick Boy neglects his baby for too long. When Mark begins to feel himself slipping out of control, he tries to stay straight despite his constant hankering for the needle. He continually struggles between choosing a life that is socially acceptable and moral or falling back into the seductive world of heroin.

The Nuart Theatre is located at 11272 Santa Monica Blvd., in West Los Angeles. The film will be shown at midnight on July 15 as part of the Nuart’s “Think Midnight” series. For tickets and additional information, call (310) 281-8223 or visit www.landmarktheatres.com.