Bat and Forward: 'Batman Begins' Game has Action but not Excitement 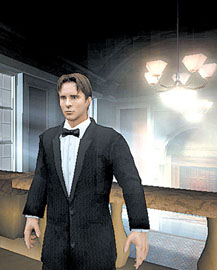 Score: Two and a half stars (out of four)

Batman’s video game library is as checkered as his filmography. A few of the Dark Knight’s digital adventures have been fun, but the rest – especially Kemco’s recent hatchet job – have been tepid, at best.

Not that homage is a bad thing. When ideas work, use them. “Batman Begins” manages the rare feat of successfully combining several game-play elements – fighting, driving, stealth – into a single game. Naturally, some elements work better than others. For example, beating up bad guys is fun for a few levels, but jamming on action buttons gets a little old and players will start exploring other options for dispatching bad guys after a couple levels.

Fortunately, “Batman Begins” offers plenty of other methods for cleaning up Gotham City. Most of the urban environments are very interactive, and a well-placed Batarang can trigger events to take out bad guys, with such items as falling boxes and debris. However, some enemies must be squeezed for information before being eliminated. Although far less grotesque than the interrogations in THQ’s “Punisher,” Batman does put the hurt on Gotham’s unsavory to get them to talk.

Cribbing a few notes from the playbook of Sam Fisher (hero of “Splinter Cell”), Batman alternately sneaks into rooms or hangs back in the shadows until the right moment to strike presents itself. Stealth attacks can be used to eliminate enemies with one blow.

Batman also has access to his “wonderful toys,” such as the classic Batarang and grappling hook, but he also has a few new gadgets, such as an optic cable that allows him to peek under closed doors. (Again, shades of “Splinter Cell.”)

“Batman Begins” employs a few racing levels that put gamers in the front seat of Batman’s Tumbler, a souped-up military vehicle that subs for the sleek Batmobile. These levels are fast and frantic, and probably the best in the game. The carnage the Tumbler can unleash is definitely something “Burnout” fans will dig, as players slam enemy cars into walls.

Electronic Arts doesn’t raise a hand without staging elaborate production values, and “Batman Begins” certainly benefits from the trademark attention to detail. Developers Eurocom enjoyed complete access to assets from the film, including likenesses and voices. Christian Bale, Morgan Freeman, Michael Caine and others in the cast are well-modeled – even if their slightly warped face-mapping does make you wish the next gen of hardware would hurry it up.

Ultimately, “Batman Begins” is compromised because you’ve pretty much seen and played the game before – just in a handful of different titles. All the mechanics are handled well enough, but the game is devoid of originality. Fans will see the adventure through to the end, but many players will find their attention wandering.

Even if you do finish “Batman Begins,” this is strictly a one-time-through game, making it a good summer rental. Save your cash for the deluge of games coming in the months ahead.

Reviews
‘Fire Emblem: Three Houses’ is Nintendo at its most flirtatious
2,474 views