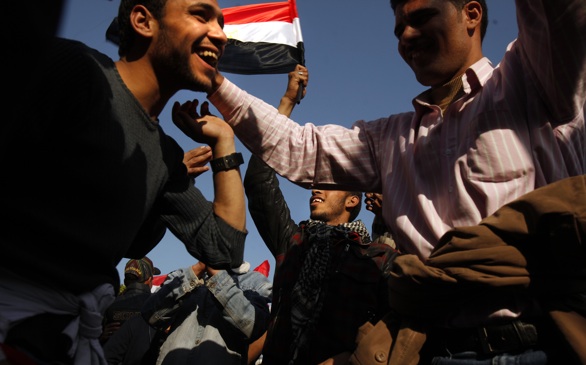 Tunisia’s president of 23 years, Mr. Ben Ali, has fled the country. President Hosni Mubarak has finally been ousted from Egypt. Protestors and opposition groups have called for a “Days of Rage” in Syria. King Abdullah II of Jordan has fired his government, and Yemen’s longtime leader Ali Abdullah has announced he will not seek re-election. But it isn’t enough.

The large population of disgruntled and disaffected youth is not satisfied, and I’m not surprised. So Ali Abdullah has announced he won’t run for re-election in 2013, but with a history of fraudulent elections and multitudes of broken promises, why should Yemeni citizens believe him? The military has claimed power in Egypt, but will there actually be a democratic transition after three decades of President Mubarak’s authoritarian rule?

Imagine this: You’re a college graduate with a bachelor’s degree in a major of your choice. You spent over $200,000 on your four years of higher education (if you attended the University of Southern California, that is), and seven years after graduation you are still unemployed. One can only image that you would be furious with the corrupt government that created the declining economic environment that has kept you from getting a job. On top of that, your government refuses to leave, shuts out all opposition and the trail of corruption can be traced all the way down to the local police. Welcome to Tunisia.

A history of oppressive, authoritarian regimes combined with corruption, large and growing youth populations and high socioeconomic inequality has fueled a frustrated shared experience in this Middle East North Africa (MENA) region that is exploding right before our eyes. A tide of unemployed and educated youth proved they could topple a Western-backed repressive regime in Tunisia, so why shouldn’t the Egyptians, or Yemenis or Syrians try?

Over the years, the West has backed authoritarian regimes in the MENA region for one very important reason: They ruled with an iron fist to keep out extremists. In a region where Muslim extremism is rampant, opposition groups were disbanded and banned so their extremist views could be silenced. Egypt, for example, has been under a state of emergency since the 1967 Arab-Israeli War. There was an 18-month break in 1980, but it was again imposed in 1981 following the assassination of President Anwar El-Sadat, the first political leader of the Middle East to make peace with Israel.v Thanks to new social media platforms such as Facebook and Twitter, one man’s desperation was able to ignite a burning fire in the hearts and minds of the youth in Tunisia. That fire is now spreading and sparking fears of instability in a region where instability could be catastrophic for Israel’s safety, U.S. interests and the future of the Arab world.

Israel is sitting on a very slippery slope as they watch their closest ally in the region undergoing the most dramatic regime change in history. Former President Mubarak was the glue holding the fragile Arab-Israeli peace together, and with him out of power, no one knows if the military will keep friendly relations with Israel or if the Muslim Brotherhood will gain unprecedented power. One must unfortunately anticipate the possibility of a new regime in Egypt that will break diplomatic ties with Israel and withdraw their recognition of the Jewish state’s right to exist.

The only other country that has made peace with Israel is Jordan, and the fate of that state is currently up in the air as well. The security of the state of Israel and the landscape of much of the Middle East has rested on the peace between Israel and Egypt. Israel depends on its relationship with Egypt for 40 percent of its natural gas reserves, to secure its southern border and to help contain Hamas.

Today, we are seeing technological advances breaching communication barriers and social media unifying a country against their government. What, or rather where, is next? Without social media, the protests would not have been able to spark what I call the “social unrest domino effect” that we are seeing in the Middle East and North Africa. Free Internet platforms such as Facebook and Twitter have allowed people to organize on massive scales, making their voice more profound and heard all around the world. As for what’s next, I guess we will all have to sit back, not relax and bookmark our Twitter and Facebook pages, because only the Internet can tell where the revolution will spread next.