I Am Number Four: Dianna Agron “Glee”-fully accepts the challenge. 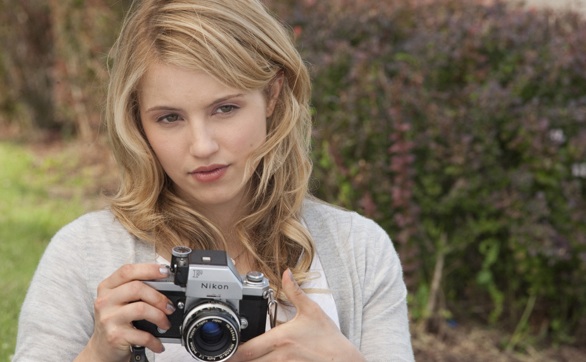 Every actor and actress dreams of being cast in a show that becomes a part of the cultural zeitgeist. Save for a few already-famous cast members, “Glee” became a game-changer for most of the members of New Directions, turning them into household names seemingly overnight and thrusting them all into the mainstream spotlight with a potent combination of high ratings, sold-out tours and near weekly assaults on the Billboard charts.

Even rarer still is the chance for a small-screen star to parlay their acting chops onto the big screen. It wasn’t too long ago that stars were either “movie” stars or “TV” stars. It was the rare actor who was able to (and wanted to) navigate both mediums. Lately, though, the industry has finally learned that a TV star can bring in a built-in audience to a film role. Conversely, movie stars (especially women) can find the kind of nuanced, fully developed characters on television that are often in short supply for a film industry that mainly caters to teenage fanboys.

Not long ago too, television studios were reluctant (if they didn’t outright refuse) to let their stars work on films that might interfere with a TV shoot. Likewise, movie studios weren’t too keen on the idea of having to work their shooting schedule around a TV shooting schedule. Tom Selleck (“Magnum P.I.”) and Pierce Brosnan (“Remington Steele”) are two famous instances of an unwillingness of the two to work together when they had to turn down the roles of Indiana Jones and James Bond, respectively.

We, too, have all heard the stories of actors who leave a big television hit to pursue a movie career, supposedly because the two can’t coexist. In the past couple decades, though, both the suits and the talent have wised up.

“Friends” was one of the first TV series to work its shooting schedule around cast members’ movie shooting schedules. In return for scoring a member of one of TV’s highest rated shows, films worked their shoot around the TV schedule. Courteney Cox, for example, was able to shoot “Friends” and Scream at the same time because everyone worked together to make the schedule work. She worked on “Friends” on Monday through Thursday and then moonlighted on the Scream set on the weekends. With this newfound synergy seemingly being a win/win situation for everyone involved, these types of overlapping shoots are becoming increasingly common.

The sophomore hit “Glee” seems to be the latest show to accommodate its in-demand stars’ busy calendars. One of the “Glee” stars who seems to have taken the most advantage of this synergy is Dianna Agron.

Seemingly overnight – though it never is – Agron has managed to not only portray the on-again, off-again head cheerleader Quinn on “Glee,” but also make her mark on the big screen as well. Last year she co-starred in the ensemble movie The Romantics with Josh Duhamel, Katie Holmes and Anna Paquin, and she also appeared in Burlesque with Cher and Christina Aguilera. Now, she’s about to have her biggest role in her biggest movie yet, I Am Number Four. This role wouldn’t have happened for her if people weren’t willing to work together.

I Am Number Four is an action-thriller about a teen, John Smith (Alex Pettyfer), who is a fugitive on the run from ruthless enemies. Changing his identity, moving from town to town with his guardian Henri (Timothy Olyphant), John is always the new kid with no ties to his past. In the small Ohio town he now calls home, John encounters unexpected, life-changing events – his first love (Agron), powerful new abilities and a connection to the others who share his incredible destiny.

If you are a fan of teenagers with extraordinary powers trying to live ordinary lives while fighting forces of evil, then you’re in for a treat. Just scan the resumes of I Am Number Four’s writers. Alfred Gough and Miles Millar were writers on “Smallville,” while Marti Noxon wrote for “Buffy the Vampire Slayer.” With both shows enjoying long, critically acclaimed runs, this bodes well for I Am Number Four’s chances to connect with audiences. To up the action quotient to balance the teen angst, the action maestro himself, Michael Bay, is producing, while director D.J. Caruso aims for a hat trick of hits after Disturbia and Eagle Eye.

Like Courteney Cox before her, Agron had to balance her “Glee” commitments while filming I Am Number Four. The movie shoot coincided with the “Glee” summer tour of 2010. It almost didn’t happen though. At one of the awards shows last January, Agron was at a party with her friend who works for casting at DreamWorks.

“My friend says to me, ‘I want you to meet with Steven,’” Agron begins. “I had no idea she was talking about Steven Spielberg. So he comes up and says we have this movie and you’d be perfect for the character of Sarah, but I think we’re filming in the fall, and I know you’ll be back at ‘Glee’ so it wouldn’t work out, but you’re great. I was like, what just happened.”

As it turns out, they moved the shoot to the summer of 2010, but the powers that be knew that she would be on the “Glee” tour. Her manager’s persistence helped land her the role, and both sides were really willing to work with each other. Agron assures that it helps to have teams of people working together.

Agron herself had doubts as to whether this grueling schedule would work, but “there was a lot of shifting around,” she admits. She had no down days, but was able to balance both jobs, and she is grateful for that.

As with any actor, Agron was happy to branch out. “I like to play something different. It doesn’t have to be worlds apart, but there has to be something new, some challenge.”

Though she was able to keep the characters of Quinn and Sarah separate, there was a funny instance where one take was Quinn’s voice, which is a little higher than Sarah’s.

It was also her first time acting in front of a green screen, and she was “excited to get into the action sequences. You felt like a kid and just used your imagination. I loved it.” Though secondary, the love story in I Am Number Four is an integral part of the story. Usually, before actors are cast in a movie, they screen test together to see if they have chemistry. We’ve all seen movies where the romantic leads don’t have that chemistry, and that can spell disaster at the box office. Agron was concerned before the first table read about the chemistry between her and Pettyfer’s characters.

“It’s common that people can be fired at a table read if their characters don’t gel.”

It was her first time meeting a co-star away from the set or audition, but she feels that their meeting helped at the next day’s table read, as they were able to alleviate any feelings of nervousness. Since she was obviously not fired, everyone felt they had that elusive chemistry.

Agron enjoyed working with Pettyfer because “he was a hard worker. He came to the set on time. It wasn’t like he wouldn’t come out of his trailer. He wasn’t a diva.” He was professional, and Agron feels that comes across on the screen.

Soon, audiences will be able to judge for themselves.

I Am Number Four releases in theaters Feb. 18.