Where's the Funny?: A Roundup of Improv Spots to Up Your Laugh Factor 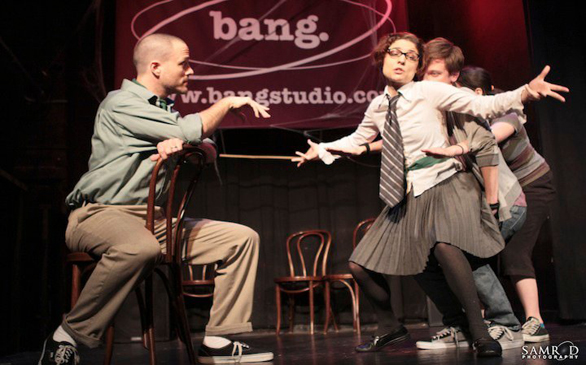 If you spent any time in front of the TV in the late 1990s, the era of ABC’s Friday night family comedy block, then you’re probably familiar with the comedy game show “Who’s Line Is It Anyway?” where, as host Drew Carey reminded the audience each week, “Everything is made up, and the points don’t matter.” If you were like me, you were unwittingly watching short-form improvisation.

Improvisation (improv for short) will help you in every aspect of your life, by giving you the confidence to roll with whatever life hands you. Improv is also where most famous comedians get their start – practically every cast member of “Saturday Night Live” auditions from one improv company or another.

The foundation of this performance art form is play; you’ll notice in reruns of “Who’s Line” that all the performers are having a blast. How do you get in on all the fun? Here’s a rundown of the most established schools in the L.A. area as well as opportunities at local college campuses.

iO West (formerly Improv Olympic) welcomes students of any field. The focus at this school is the long form the “Harold,” which is introduced in the very first level.

iO started in Chicago, where the “Harold” was created, and their philosophy stems from the long-form style of improv of which the “Harold” is a type. In the “Harold,” improvisers create a series of scenes within three distinct “worlds,” all based on a single suggestion from the audience. It is a great learning tool for improv because it is highly structured like the rules in short-form improv games, only with a long-form free-for-all attitude.

iO West teaches agreement, the game of the scene, working well with improv partners, all the while teaching the “Harold” form. Students progress through each level with teacher approval, no audition necessary. In level 5, students get the opportunity to perform the “Harold” twice a month in the Sunday student show. On completion of the program’s seven levels, students can perform in a grad group with teacher recommendation.

Founded in 1995, this improv school features a conservatory-level program aimed to expose people of all walks of life to the form. You’ll learn a wide variety of philosophies on improv, including character work, teamwork-fueled organic scenes and “the game” of the scene. One of the overarching attitudes at bang is that of support: Every class is built around the idea that the theater is a safe place where your fellow students, as well as the teachers, share the learning process with you. The people you start out with will eventually become your performance group. There are no auditions for the eight-month program that comprises four levels, which are eight weeks each. At the end of the eight months, a six-month Masterclass commences with weekly performances of “The Harold” long form in the Friday student show. Every student in the class who remains in the program to the end of the fourth level is part of your group. This means that you have been learning with the people you perform with for eight months before you first set foot on the stage in front of an audience. (Plus, tuition decreases as you move through the program, a unique feature among L.A. improv schools!)

If you are a fan of “SNL,” you may have heard of the Groundlings, a troupe and school that was founded in 1974. Many of the cast members on the show throughout the years have come out of the Groundlings. Where this school excels is in character work, and graduates often leave the program with an arsenal of quirky characters, like in the case of “SNL” cast member Kristen Wiig.

The core program here is meant for professional actors; it starts with improvisation and leads to “SNL”-like sketch comedy writing. Performance opportunities are available if you are invited into the company after completing the core program. If this is your ambition, then this is a prestigious pl

ace to go. Auditions are required to get into the program and progress through it. There is also a beginner’s class for people who just want to try out improv and see what the Groundlings is all about, no audition required. This course teaches improv as a way to relax and have fun. Also, as mentioned before, the beginner’s class helps strengthen confidence and quick thinking.

Beginners Improv Workshop A is $255 for six weeks. For more information, visit groundlings.com.

Second City, one of the oldest schools in the country, started in Chicago over 50 years ago. As far as improv troupes go, this is the one with the longest legacy. Del Close (who pioneered the “Harold” long form) was a director at the Chicago theater, and as a result, the focus at this school is the long form.

Second City L.A. offers a three-level basic improv program, for those who want to try out improv as a way to boost confidence and improve public speaking and quick-thinking skills. Each level has a focus on one particular area, starting with agreement (saying “yes” to your partner), moving to characters and ending with scene work. The school also offers a five-level conservatory program, which requires an audition. This program is designed to train students in improv and comedy sketch writing so they might develop a Second City-style scripted revue. Performance opportunities are available in this program; performances start in level two and become more frequent in level five. One of the unique qualities of the conservatory program at Second City is that they spend one class level training students on political and social satire.

The Basic Improv Level One is $355 for 7 weeks. For more information, visit secondcity.com.

Upright Citizens Brigade (UCB), a comedy theater that originated in New York City, has an improv training center that requires no audition. The driving philosophy at UCB is that of “the game” of the scene. In this way of thinking, improvisers find the funny idea of the scene and dig into it, exploring every facet of it. This philosophy has become the trademark of the theater, making it the unique feature of this school.

Like other schools, UCB focuses on a different topic in each of the four levels of its program and at the end of each level, there is a graduation performance for the students to show off their skills to an audience, and they progress in the program. Beyond this, there is opportunity for performance if you are recommended by a teacher or if there are auditions held for Harold teams that perform regularly at UCB. The program here is mostly spent in the classroom, with a few performances throughout the learning process. Each level consists of a weekly class in an eight-week period.

Level One is $350 for 8 weeks. For more information, visit losangeles.ucbtheatre.com.

College is a great place to learn improv with your peers! Many schools offer improvisation courses through the theater/drama department. This is greatly recommended if you want to get credit for having fun. Also, there are many established improv performance troupes at university campuses in the Southern California area.

UCLA plays host to Rapid Fire Improv, who claim to be “more awesome than a shark giving a high five to a silverback gorilla.” Unfortunately, during the research of this article, the reporter could not discern if this statement is true.

USC boasts at least two performing troupes, Second Nature Improv (2nimprov.com) and Commedus Interruptus (commedus.com). The former performs long-form improv and the latter, a variety of forms. They argue regularly over who is the official group of the school. The one thing common in all these groups is that they require an audition to play.

If you think you have what it takes, go for it! If nothing else, you can always round up a group of friends, grab an old “Who’s Line” tape and a Del Close book and start your own improv group! The great thing about improvisation is that actually the best improvisers are children, because really all it comes down to is the simple notion of play. Anyone can do it, you just have to find that inner child that we all have in us.