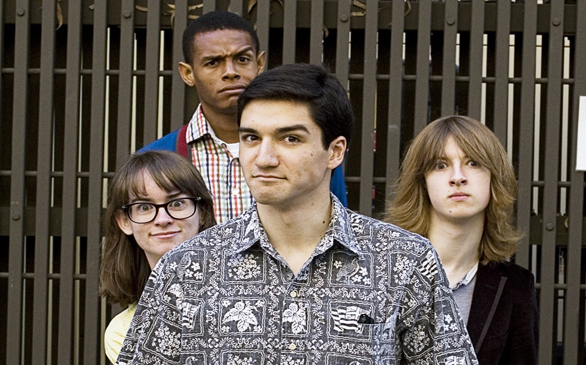 Being a college troupe, you’re always changing personnel due to people graduating, new freshmen coming in, etc. What’s the current makeup of the troupe?

Second Nature: Right now we have a total of nine members with a wide range of backgrounds. We have a variety of majors represented … some that make sense with improv like theater or film, but we also have people majoring in history or economics. We range from freshmen to seniors and have some folks who have been doing stand-up since age 13 and some who never had any prior improv or comedy experience before getting in the troupe.

So what is Second Nature all about?

Poop jokes. But seriously, we’re all about pushing the ‘improv envelope’ by trying new forms, new styles, etc. We’ve evolved over the years to be a purely long-form troupe. The goal is to always be experimenting, always striving to get our improv to a better place. A key to that is connecting and interacting with other troupes, both here on USC’s campus as well as troupes from other colleges.

You mention other troupes on campus, is there a sense of rivalry between troupes?

Possibly surprising, but the answer is no! The three main troupes on campus have different focuses, and it ends up working well together. Second Nature does only long form, Commedus Interruptus does predominantly short-form improv and sketch while the Merry Men do British-themed improv. They come out with tights and poofy shirts and speak in British accents, it’s an absolute blast! The three troupes complement each other beautifully and create a solid improv community at USC. We’ll do joint shows with the other troupes each year, and they are always a highlight. Even more importantly, over the last few years, popularity of improv on campus has increased, and we have had a tremendous amount of support from our audience.

Now with all these troupes, how often do you get to perform on campus?

Each week we’ll do an hourlong show on campus at the Ground Zero Performance Cafe. They are completely free and we usually get, oh I’d say 14,000 or so people … OK, maybe closer to 50 to 60, but it’s always a good time.

In addition to your weekly shows, do you do any sort of special events?

Yes! Our main event of the year is the Fracas! Improv Festival. Second Nature has hosted the festival each year at USC and the Eighth Annual Fracas! Improv Festival will be held this April 7-9. We bring in about 20 other college troupes from across the country to perform and connect as improvisers. There are workshops conducted by professional improvisers from the L.A. improv scene as well as celebrity panels. In the past, we’ve brought in cast members from “The Office,” “MADtv” as well as folks from iO, Second City and the Upright Citizens Brigade. Each year the festival gets bigger and better, and this year’s Fracas! looks to be the best of all time. We also do a Spring Break Tour up through central and northern California. While other folks are partying, we’re doing what we love: improv! Each spring break we perform with improv troupes at UC Santa Barbara, UC Santa Cruz, UC Berkeley and UC Davis. It’s a tremendous experience, and we’ll be heading north again this spring break!

Putting together a large-scale festival takes a lot of commitment to improv. Will all of you be planning to continue on with improv or comedy after graduation?

It’s a good old-fashioned mixed bag with us … some of us will be working the stand-up circuit, some will be doing comedy writing, others plan to work their way up to performing on “SNL.” But hell, we also have a guy who’s going to work at a bank, so we’re all over the place. However, all of us plan to keep improv in our lives to some degree. Whether that’s taking some classes or hopping in an improv jam every once in a while, we all love improv and will keep it a part of our lives.