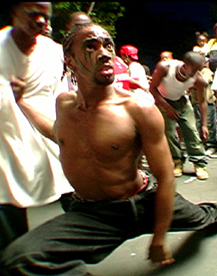 Twenty years ago, break dancing and its cousin pop lockin’ fascinated kids and horrified parents. All that spinning around and making one’s body contort would become the future of urban dance. Now, "krumping" has taken over and, like its predecessors, the movement intrigues the younger generation and makes the older generation question what the hell is going on.

To document this offshoot of urban culture, filmmaker David LaChapelle went to South Central, Los Angeles and witnessed kids krumping, which basically means they engage in a form of freestyle movement where the body shakes with vigorous intensity. Along the way, LaChapelle came to know Thomas Johnson – better known as Tommy the Clown – who, as documented in LaChapelle’s Rize, started the krumping trend.

Before krumping began to take off, Johnson was the man you called to get your child’s birthday party bouncing on a G-rated scale. His uniform – a rainbow wig and colorful jumpsuit – was his staple and he made it his duty to entertain the crowd and make the birthday boy or girl feel special. Johnson and his team would do their clown dance, which they called "clowning," while donning smiles and wide painted faces and exuding tremendous energy.

Johnson is one of many dancers featured in Rize, which is currently playing in limited release. The other players include Johnson’s protégé Larry, choreographer Lil "C" and dancer Ms. Prissy, all of whom got their first taste of Hollywood attention while promoting this film. Apparently, both Johnson and Larry still can’t believe all this fuss is about a dancing group of kids from South Central.

"I’m still shocked. I’ve never seen so many microphones and tape recorders in my life," the 20-year-old Larry, an aspiring actor and comic, said at his first-ever press conference. "It’s like a dream. I keep happy because I’m out and I know the Lord got stuff out there for me. And just to come up and talk to you all this morning is the most beautiful thing I’ve done today."

While Larry charmed with his edgy humor, Johnson repeatedly folded and unfolded a white towel, trying not to look up. He is extremely surprised how worldwide krump has become. During a recent trip to London, he met a fan who was wildly excited about the documentary and seeing Johnson.

"David [LaChapelle] came in and heard about the dancing, documented it and treated it like a child," Johnson said. "The motivation was there and this thing has gone crazy."

"When we were first approached with the idea, David wanted to come in and he was interested in what we were doing," said Lil "C." "It was around the time he already filmed stripper dancers and got into that style. He filmed Tommy and his clown troupe for a number of months. When he found us, it was a missing piece to a triangle, so to speak. When he came to us, he didn’t come to us as David LaChapelle, the world-renowned photographer with a scroll of celebrities. He came as David and exuded passion."

LaChapelle has reiterated many times that these dancers were already stars long before he came up with the idea for Rize – and not because the Hollywood machine said so, but because they were already practicing their craft long before anyone knew what it was. They dispelled the stereotypical thug life that’s equated with the hood by choosing to create instead of destroy.

Rize is currently in theaters.