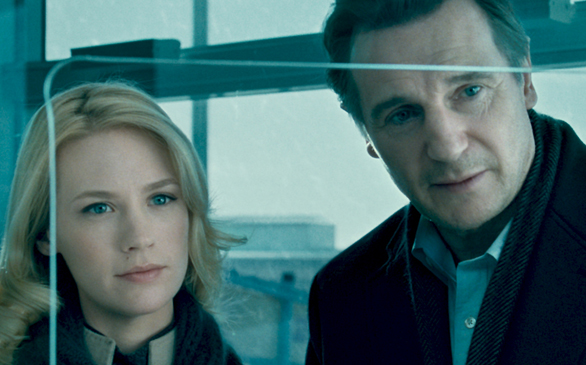 Catching sight of January Jones at the gilded Peninsula Hotel in Beverly Hills, her patrician beauty perfectly complimented by the surrounding marble and gold, wall displays of diamonds and a Neiman Marcus boutique where one might normally find a newspaper stand, you can’t help but sit up and take notice. Her slight frame is tightly encased in a crisp teal green dress and the front of her roughly swept up blonde hair tickles alabaster cheeks and a swan-like neck. Seeing her in person, it’s obvious why Jones’ best-known character, Betty Francis (formerly Draper) on “Mad Men,” is so often compared to Grace Kelly.

Following in the footsteps of Princess Grace, in Jones’ new film, Unknown, she plays a character that is very much an homage to Alfred Hitchcock’s heroines of the ’50s and ’60s. The thriller stars Liam Neeson as a doctor who awakens from a coma, only to discover that someone has taken on his identity and no one, including his icily aristocratic wife (Jones), believes him. So he has to team up with another super hot blonde bombshell (Diane Kruger) to uncover who he really is.

Unknown marks Jones’ first turn in a major film role since “Mad Men” debuted in 2007 and quickly became the most obsessed-about show to land on television since Oceanic 815 crashed on a deserted island. Later this year, Jones will also be seen as Emma Frost in X-Men: First Class, the origin story prequel to the X-Men series. Both films are big, showy action pieces that are a far cry from the stylized drama that made Jones a household name, which was part of their appeal.

“What I liked about this role was that it was something I hadn’t done before, and it was interesting and indefinable in the way that I think the audience gets to decide whether she’s a good guy or a bad guy,” Jones begins. “It had a little touch of [film] noir; an homage to the old Hitchcock films. It was fun for me.”

So fun that it might inspire her to leave Don and the madness of Sterling Cooper Draper Pryce behind to pursue big screen dreams instead?

“‘Mad Men’ is my first stint in TV, and it doesn’t really feel like TV to me,” she says, adding, “It depends on the project; [I want to do] whatever keeps me interested and challenged.”

From small to big screen, there is, however, a certain similarity in Jones’ roles. When describing both Betty Francis and Unknown’s Elizabeth Harris, the simplest and best term to classify the characters would be as “ice queens.” The mention of that term makes Jones cock an arched eyebrow and curl her pillowy pink lips into a polite sneer.

“What’s so fun about being sweet?” she retorts. “Am I typecast as being horrible? Maybe. It’s kind of great, isn’t it? I try to always do something different [every time]. I don’t think that this character has anything to do with anything I’ve ever done before. I think that sweet can be boring, so I will try to stay away from that for everyone’s sake,” she laughs.

Whether or not “ice queen” is the proper term for Jones’ acting niche, she could also be classified as a smart, ambitious actress whose drive to succeed was well rewarded. Asked if she’s followed any sort of career road map, she takes a moment to consider the question:

“I don’t know if I have a plan or if I ever had a plan, but I’m very happy with the way [my career] has gone. I’m still very motivated and inspired and challenged. I’m not ambitious anymore.”

Jones insists a better word to describe her would be “jaded” with a dash of very lucky.

“I’ve been able to work with a lot of great people and have been lucky in my choices,” she says demurely. “I’m very strong willed, so that’s helped a lot. But really I just feel very lucky to have been able to do the things I’ve gotten to do and haven’t made too many mistakes … yet.”