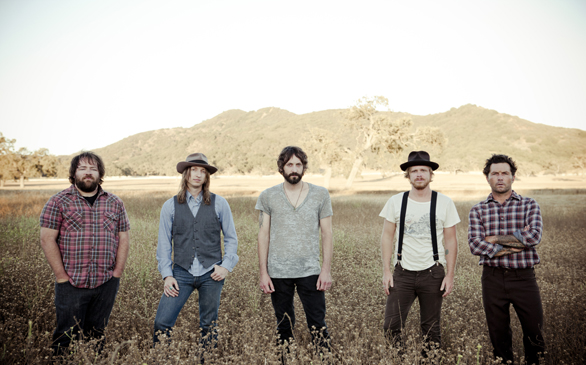 Four years ago, Everest formed in Los Angeles with dreams and hopes of success. After recording their debut album, Ghost Notes, Russell Pollard (lead singer and guitarist), Jason Soda (guitars, keyboards), Joel Graves (guitars), Elijah Thomson (bass) and Davey Latter (drums) headed for the road and gained fans in each city. The reaction was overwhelming, and they quickly gained popularity after each performance.

As their success gained momentum, they released their sophomore effort, On Approach, last spring, which was well received amongst fans. Since then, they have toured the country with My Morning Jacket and played in countless venues across Canada and Europe. Their exposure has launched them onto everyone’s radar since appearing on “Late Night with Conan O’Brien” and “Late Night with Jimmy Fallon.” Playing in front of millions on television didn’t intimidate the group at all.

“We were strangely comfortable doing that,” says Graves. “We had been playing these songs live, and it was in the middle of the tour, so we were in the mode of playing every night. Because of that, getting up and playing live is something we do naturally. We’re really confident on playing live.”

During last autumn’s tour, Everest recorded each performance and released it to the public free of charge. This was their way of expressing their gratitude to the fans in each city. Treats much like this are quickly becoming a staple for the band.

“It’s exciting to have fans that care enough to download that, so we feel lucky that people want to hear the shows,” offers Graves. “The response has been really great. It feels good being able to share music with people. These are all rewards for people who come out and support us during live shows. We stand by what we do every night, mistakes and all. Every show is different, so it’s fun for people to check out the evolution of things even throughout a tour.”

Life on the road has been a learning experience for the band since releasing Ghost Notes. Everest has evolved into a strong collective while discovering themselves in the process.

“Being on tour put us in front of a lot of people and in big arenas that we weren’t use to,” says Graves. “I think in a lot of ways, it made us become different performers and a different band playing in spaces that large. We each found our own individual voices and figured out how they worked together. We grew closer to something that we’re trying to be, but we’re still working on it. As a band, we developed how we worked together. Our sound is five unique individuals. ”

Everest shows no signs of slowing despite last year’s busy schedule promoting On Approach. They are currently in the studio rehearsing new material and composing songs. Still in the early stages, they continue to stay active individually while also collaborating.

“We’ve been working together in a room,” laughs Graves. “Different members have sampled some song ideas individually, and we get our hammers and nails and start working on them together. I think we’ve got five or six songs we might start playing live during some upcoming shows. The idea is to get them while they’re hot after we’ve played them live for a month.”

Still, no release dates have been announced for the yet-to-be titled album, but recently Everest announced a Residencies in February tour covering San Francisco, San Diego and Los Angeles. The California tour makes three stops at each city capitalizing on small venues for intimate performances. Fans have an opportunity to experience Everest in a small capacity venue as they rehearse new material. Although audiences appreciate smaller locations for live performances, Everest enjoys every concert regardless of the attendance.

Everest perform Feb. 21 at the Echo and Feb. 28 at The Satellite. For more information, visit everestband.com.