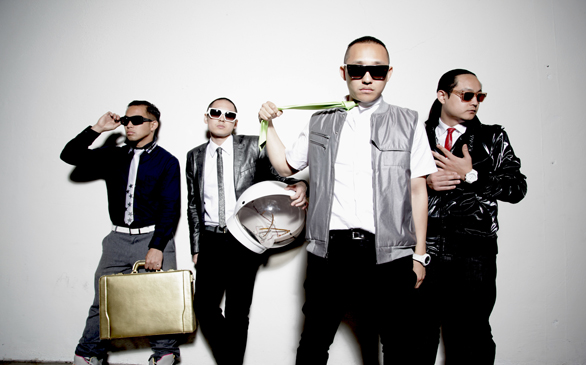 Sure, they have been active in the music industry for nearly eight years. And yes, odds could have been against them. But Far East Movement’s time to prominently shine with their unique orchestrations has arrived, as they prepare to showcase one of their hit songs during the NBA All-Star Weekend and embark on a world tour.

“We will be singing ‘Rocketeer’ after the three-point contest during the NBA All-Star Weekend,” member Kev Nish states. “This is a song that almost did not make it in our album because our label did not approve at first.”

“We really wanted to show a wide range of music with this song as musicians,” Kev Nish elaborates.

There is this mellow, romantic beat to “Rocketeer.” Simultaneously, it displays an upbeat outlook. Different songs represent different things for different people. Perhaps this could be about love. Maybe it relates to motivation. But that is the beauty of this tune, because it can bring unique meaning to each listener.

Even though “Rocketeer” depicts Far East Movement’s diversity in evolving music, “Like a G6” is the ultimate party, club and dancing melody.

“‘Like a G6’ is definitely a party song,” Kev Nish says. “It is kind of like ‘Girls On The Dance Floor.’ It is a song that is linked up with high levels of energy and girls dancing. There is this connection involved.”

A true hit, “Like a G6” reached No. 1 on the Billboard Hot 100 Chart and iTunes soon after its release.

“Like a G6” features the participation of the Cataracs, an indie-pop duo from Berkeley, and Dev, a 21 year old from NorCal as well. Born in Tracy, Dev grew up in the city of Manteca; she is half Mexican and Portuguese, and her diversity is prominent in the chorus of the track. Approximately a month after its debut, “Like a G6” accumulated double platinum status for amassing two million in sales – and counting.

Composed of Kev Nish, Prohgress, J-Splif and DJ Virman, this electro hop quartet features a rather young core. All the members are Asian American and represent Japanese, Korean, Chinese and Filipino backgrounds.

“We all grew up in Los Angeles,” Kev Nish remarks. “We would go to many clubs at night and see how the music scene was.”

And that has benefited them substantially, which is solidly portrayed on Free Wired. This album has mixes of electro hop, hip-hop and pop; it really is diverse when comparing it to other CDs in the market.

Mix together talent, excitement, hunger, hard work and passion, and you can see why Far East Movement continues to build both professionally in the industry and personally as a collective unit.

Kev Nish lists Kanye West as one of the artists they would not mind working with in the near future, claiming that what others do to push boundaries is relevant not only to them, but to society as a whole.

Not too long ago via Twitter, West tweeted about Far East Movement, expressing that he felt the vibes of “Like A G6.” Kev Nish offers his input on social media.

“For us, social media is like ‘a do-it-yourself operation’ because no one can do it the way you want it,” he says. “We are online all the time. We blog every day, and we use Twitter daily because we want to say active.”

As a segment of Rihanna’s Last Girl on Earth Tour, Far East Movement is scheduled to tour Australia with the pop star and Calvin Harris during late February and early March.

This is just another way for Far East Movement to showcase Free Wired’s hot tracks with appearances by Tedder, the Cataracs, Dev and also Snoop Dogg, Lil Jon, Keri Hilson, plus a song co-written by Bruno Mars. Not bad for a group that attained their name from one of their own songs (“FM”).