Fallin’ Up: My Story: BEP’s Taboo lets his hair down in his memoir. 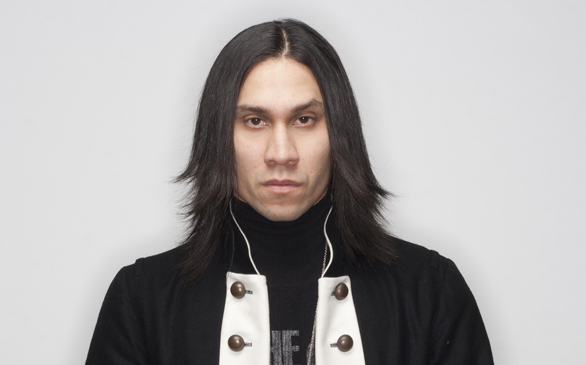 The Black Eyed Peas’ performance at the Super Bowl put another notch in the belt of a band who shot to the tops of music charts and created one of the most anthemic tracks for quite some years with their single “I Gotta Feeling.” But as is mostly the case, music fans don’t always know the story behind the scenes.

For Taboo, the best way to tell his story was in memoir form. The Black Eyed Peas member recently released Fallin’ Up: My Story, a memoir written with Steve Dennis about Taboo’s life before and during his fame with the Black Eyed Peas.

“I wanted people to get to know who I am as an individual. People know the Black Eyed Peas, but they don’t really know me as a person,” Taboo offers.

The memoir’s first lines suck the reader in immediately and make it clear that this is not a memoir that will be tinged with rose-colored idealization. The very first scene in the preface places the reader in a jail cell with Taboo. Every emotion is craftily spelled out for the reader, and Taboo seems to be asking not necessarily for sympathy, but for a platform to honestly share his experiences. The Black Eyed Peas part of his identity is still there, but what the reader sees is an average person struggling with the more negative parts of his life.

“I think it’s more of an intimate and vulnerable side to me as an individual when it comes to my writing as an author,” Taboo says.

In looking back at the rougher parts of his life, including jail time and alcoholism, Taboo felt the making of the memoir became more than just writing a book.

“I approached it on more of a having to remember a lot of things and living those moments again, and I started getting choked up when I started thinking about my grandma and thinking about all the struggles I went through and all the things me, Will and Apple had to go through ....  and all the accomplishments, the great things that happened and also dealing with a lot of demons that I had to deal with in my past,” he says.

Instead of shying away from his mistakes and hiding them behind the glare of stage lights, Taboo takes the opportunity to write a book that he feels will reach out to readers, and that held much personal importance for him.

“I needed to get things I went through off my chest,” he reveals.

Though the memoir includes many difficult themes to deal with, Taboo does not want his readers to take the entire work with too much seriousness.

“I want people to take away a little sense of inspiration, hope, motivation, laughter. I want people to laugh at some of the things that I went through. If I can’t poke fun at myself, I’m taking myself too seriously, and I don’t want this book to be a serious book. Yes I fell hard, I fell down and now it’s time to wipe off my knees and fall up,” he says.

Taboo stresses that just like the Black Eyed Peas’ music, there is no specific group this memoir aims to target. Instead, he wants Fallin’ Up: My Story to stand as a narrative that any reader of any background can read and take to heart.

As for writing in the future, Taboo feels the emotional involvement with this memoir will make it the only one he writes. For Taboo, the memoir made him not only share his experiences but also strongly relive things he hadn’t thought of in quite some time.

However, he is considering delving into the realm of fantasy and maybe crafting a story about a Mexican hero from East Los Angeles as a tribute to his community.