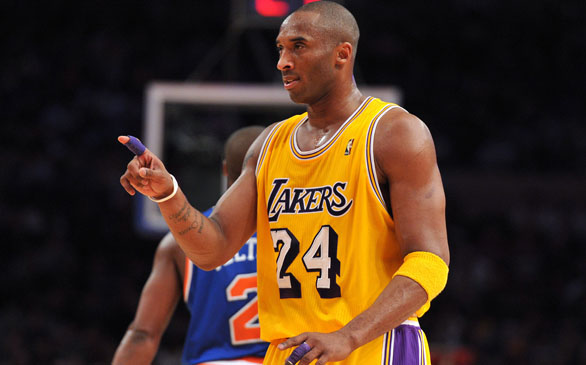 Kobe Bryant led the Lakers to a 92-86 victory over the Celtics Feb. 10.
(Credit: Christopher Pasatieri/Newsday/MCT)

For the first time this season, the Los Angeles Lakers played like a championship team from beginning to end. Their efforts resulted in a 92-86 road victory that truly left Boston fans silent on Thursday night.

Pau Gasol registered one of two double-doubles for the purple and gold after collecting 20 points and 10 rebounds, but Lamar Odom’s 10 points, 12 rebounds and three integral blocked shots could not go unnoticed. Andrew Bynum posted 16 points and nine rebounds, while Shannon Brown had 12 points.

By halftime, the Celtics held a 53-45 edge. However, the Lakers put on an impressive run that boosted them to the victory.

“In the first half, they got a lot of easy opportunities in transition, a lot of easy catch-and-shoots and things like that,” Bryant tells the media. “We just kind of had to put a stop to it.”

Other than out-rebounding the home squad 47-36, one important factor of determining the game’s outcome came by shutting down Paul Pierce. Bynum acknowledges that.

“The third quarter we decided to play some defense, and Kobe got hot. It’s just that simple,” Bynum offers reporters. “We stopped being so late on the rotations. Pierce wasn’t quite as effective.”

Pierce finished with a total of 15 points on just six field goals made from 15 attempts in nearly 40 minutes. All Celtic starters scored in double figures.

The Lakers, who are currently 4-1 away from home during this East Coast visit with wins over New Orleans, Memphis and New York, play the Bobcats in Charlotte tonight and the Cavaliers in Cleveland Wednesday.