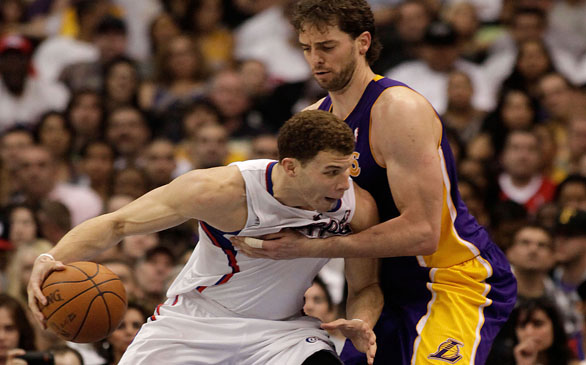 The Clippers’ Blake Griffin and the Lakers’ Pau Gasol will represent the West as reserves.
(Credit: Barbara Davidson/Los Angeles Times/MCT)

There is no better place than Los Angeles to host the NBA All-Star festivities, and it happens this weekend at the Convention Center and Staples Center in downtown.

On the other side, the West starters are led by Lakers’ Kobe Bryant, who was the top player with votes. The other four include Oklahoma City’s Kevin Durant, Denver Nuggets’ Carmelo Anthony, New Orleans Hornets’ Chris Paul and Yao Ming (who is out due to injury). Two other players from Los Angeles made the reserves in Lakers’ Pau Gasol and Clippers’ Blake Griffin, along with Tim Duncan, Manu Ginobili, Kevin Love, Dirk Nowitzki, Russell Westbrook and Deron Williams.

Look for the West to win because of home court advantage.

Yes, the main event that every fan awaits every year is the actual All-Star game (Feb. 20, 5 p.m.), but the NBA All-Star Jam Session brings more to town. On Friday, Feb. 18, three spectacular events are scheduled to take place, starting with the NBA All-Star Celebrity game at 4 p.m. Thus far, celebrities such as Justin Bieber, Common and Jimmy Kimmel are scheduled to appear. Of course, there are NBA legends like Magic Johnson, Bill Walton, Scottie Pippen and Chris Mullin appearing as well.

This affair will be followed by the NBA D-League Dream Factory and Slam Dunk Competition, with Griffin participating as well.

Throughout the entire Jam Session proceedings, fans will have the opportunity to meet some NBA players.

“Although the schedules are subject to change, Chris Paul, Blake Griffin and Dwyane Wade are some of the players that people can meet,” NBA’s Director of Events and Attractions Lisa Quinn states.

For additional details and discounts, college students can find more information at nba.com/jamsession/2011/.