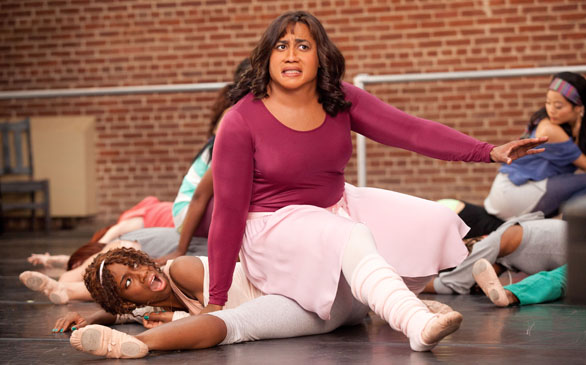 There’s a big reason to watch the third installment of the Big Momma films, according to director John Whitesell.

“It has dance and music and puts some juice back into the franchise,” says Whitesell, who also helmed the predecessor Big Momma’s House 2.

Reuniting Martin Lawrence, producer David T. Friendly and Whitesell, Big Mommas: Like Father, Like Son sees the return of the plus-size, floral dress-wearing grandma (Lawrence). This time, he is joined by his stepson Trent (Brandon T. Jackson), as they go undercover at an all-girls performing arts school after Trent witnesses a murder. The two, posing as Big Momma and hefty coed Charmaine, must find the killer before he/she finds them.

When the character of Big Momma was introduced to movie audiences in 2000’s Big Momma’s House, the film became a global box office sensation. The fun continued with a follow-up, Big Momma’s House 2, as audiences around the world responded to Lawrence’s larger-than-life portrayal of a sassy matriarch with a big heart and a bad attitude.

The success of the first two Big Momma films led to this third offering, but Lawrence, Friendly, Whitesell and screenwriter Matthew Fogel wanted the new film to reinvent the franchise and not merely continue a successful formula. In doing so, they opened the film up to an audience largely untapped by Big Momma’s House and Big Momma’s House 2 : teens.

“Our movies are traditionally very strong with African-American audiences, but you don’t do the numbers we have done without also crossing over to other segments,” says Friendly. “One thing we were not hitting was teenagers. That wasn’t necessarily our core audience, and so by bringing in Brandon and this wonderful young cast, we were hoping to expand the audience a little bit, but at the same time, be relevant to the culture today, because there are a lot of music-driven things whether it’s ‘Glee’ or ‘American Idol.’”

With a talented ensemble of bright young stars, including Jessica Lucas and Portia Doubleday, Big Mommas: Like Father, Like Son is set in an all-girls high school and features several music and dance sequences.

“It’s a movie with heart and soul,” says Jackson, who modeled his alter ego Charmaine on his mother. “I was trying to make her look like my mum when she was pregnant with my little sister. She was a pretty woman, and I think Charmaine is kind of pretty, and we made the character a young, hip girl.”

For Jackson, who had standout roles in Tropic Thunder and Percy Jackson & the Olympians: The Lightning Thief, playing a woman proved quite challenging, as he had to endure the makeup chair to transform into Charmaine.

“I watched Tootsie and Mrs. Doubtfire,” says Jackson, who adds that his biggest challenge was making sure Trent could shine through the formidable prosthetics that transform the character into Charmaine.

“It’s like creating a character. The dopiest thing about being an actor is creating characters,” he continues. “Martin gave me some good advice [when it came to wearing the weighty prosthetics as Charmaine]. ‘Sit down whenever you can, chill out and have a good time.’ It’s my nature to run around the set and talk to everybody, because I come from a big family, and I like to talk to people so the suit made me focus on my performance.”

Also freshening up the franchise are new and improved makeup and prosthetics that halved the time it took Lawrence to become Big Momma.

“One of the secrets of the Big Momma movies is the tremendous amount of prep involved building the prosthetics, having the makeup tested and doing the camera tests,” says Friendly. “On the first one, the makeup took us three hours and the second two hours, and now it’s down to an hour and 40 minutes. We had an amazing makeup team lead by Wesley Wofford, who is so patient and really knows what he is doing. We now have a balance in the movie. There is comedy and there is heart, and now there is music and performance, so there is a lot more than people think.”