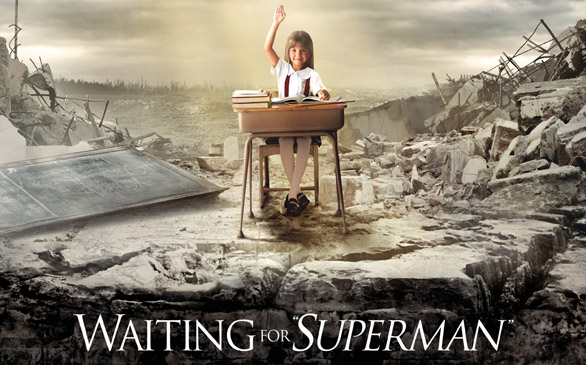 Stranger Than Fiction: Davis Guggenheim (An Inconvenient Truth) takes on another crisis facing the country, its education system, in Waiting For “Superman.” As America falls behind the rest of the world in teaching our kids, Guggenheim turns his lens on a failing system and the inspiring individuals attempting to change it. It is a vital document of our times.

Bill Moyers: World of Ideas – Writers is a monumental four-disc set of interviews conducted by the respected journalist with some of the biggest names in literature. Isaac Asimov, Tom Wolfe, Toni Morrison, Joseph Heller and Barbara Kingsolver are just a few of the lofty subjects.

The Majors: Denzel Washington re-teams with director Tony Scott (Man On Fire) for Unstoppable, a high-octane, ticking-clock thriller. An unmanned train full of deadly chemicals is on a collision course with a town. It’s up to an engineer (Washington) and a young conductor (Chris Pine) to stop it. Rosario Dawson co-stars.

The Idiotbox: Remastered and loaded with bonus features, The Twilight Zone: Season 3 comes to Blu-ray. This season includes classic episodes like “The Dummy,” “Five Characters in Search of an Exit” and “To Serve Man,” featuring guest stars like Buster Keaton, Charles Bronson and Robert Redford. Plus, there are 19 new audio commentaries with the likes of Neil Gaiman, William F. Nolan and others.

James Nesbitt is magnetic as a maverick Irish cop who goes deep undercover in Murphy’s Law: Series 3. After the IRA killed his family, Murphy must battle his own demons while earning the trust of London’s most deadly criminals. In this season, Murphy poses as hit man in his most complex mission yet.

Dr. Richard Kimble (David Janssen) finally clears his name in the The Fugitive: The Fourth Season, Volume 2, the final volume of the series. The two-part finale was one of TV’s most watched events.

The Vault: Two staples of ’70s cinema, a pair of the greatest films of all time, Network and All the President’s Men come to Blu-ray. Both films are more relevant than ever. In Network, the great Paddy Chayefsky wrote a searing and prophetic indictment of the news as entertainment. All the President’s Men attests to the importance of a free press as Woodward and Bernstein break the Watergate scandal.

Two noir classics come to hi-def: Orson Welles’ The Stranger and Kansas City Confidential. Edward G. Robinson is on the trail of a Nazi war criminal (Welles) living under an assumed identity in the U.S. As the noose tightens, Welles plans his wife’s demise to save himself. Kansas City Confidential has an ex-con (John Payne) framed for a robbery. When he sets out to get justice, he becomes entangled with a femme fatale and a crooked ex-cop.

Paul W.S. Anderson (Resident Evil) made his directorial debut with Shopping (1994), about a gang of adrenaline-junky joy riders set in the near future. Jude Law stars.

Michael Palin and Maggie Smith star in the British comedy of manners A Private Function.