No. 2 Bruins, Trojans Off to Hot Starts 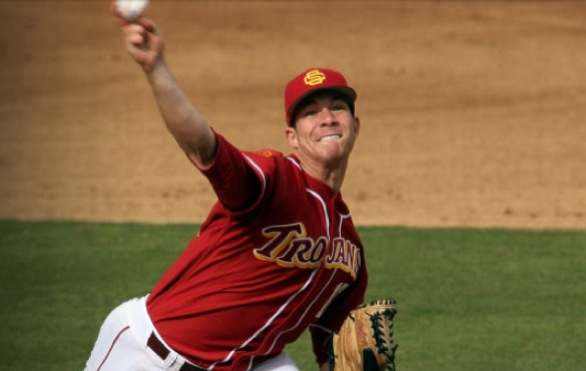 After their respective opening weekends in baseball, both the UCLA Bruins and USC Trojans are off to impressive starts. Let’s take a look at how they did.

UCLA: The No. 2-ranked UCLA Bruins (3-0) gained a sweep over the visiting University of San Francisco Dons, earning victories by scores of 1-0 (Friday), 4-1 (Saturday) and 3-0 (Sunday) at Jackie Robinson Stadium in Westwood.

However, the Bruins’ third game showed the strength of another pitcher in freshman Adam Plutko. In his first collegiate start, Plutko threw six innings, allowing two hits and a walk. Three different Bruins collected an RBI each.

The Bruins face Pepperdine once and San Jose State three times at home this week.

USC: In their 9-3 win over Missouri on Saturday, two different Trojans went 2-for-4 with two runs batted in. The Trojan offense looked sharp after totaling 14 hits and nine runs, even though they left 12 runners on base, which could have added to their potent scoring. Six pitchers saw action.

Later that day, the Trojans tallied another victory, but it came against Cal Poly San Luis Obispo, 5-2. A four-run first inning practically sent the game to an end since it terminated in five innings due to rain. Pitcher Austin Wood received the victory in five innings of work.

USC (2-1) entertains UC Riverside for one game before traveling to Houston, Texas, to visit Rice for a three-game series over the weekend.