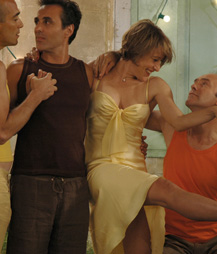 For just over 20 years, L.A.’s Outfest Film Festival – which welcomes a new venue (downtown’s Orpheum Theatre) and a wide variety of new programs in 2005 – has succeeded in bringing quality films, documentaries and shorts focusing on the gay and lesbian communities to the forefront of L.A. culture.

This year’s fest, which kicks off June 7 with a special gala screening of Côte D’Azur (in its Los Angeles premiere) at the Orpheum Theatre, is no exception. Aside from a long list of films to be screened, the fest will also play host to a number of U.S. premieres. A handful of special programs and panels will also take place including, "A Conversation with Gregg Araki" and a talk with Mysterious Skin director and recipient of this year’s Outfest Achievement Award. The panel will be moderated by helmer Tommy O’Haver (Billy’s Hollywood Screen Kiss).

A discussion with Marc Cherry, the gay series creator of ABC’s breakout hit "Desperate Housewives," will also feature some of the show’s actors and producers and there will also be a Purple Rain sing-along, where viewers can rock along to the string of catchy pop hits in Prince’s big-screen debut. "Under the Stars at the Ford Amphitheatre" Series, throughout which a handful of films – Freshman Orientation, Guys and Balls and Sevigne are this year’s selections – will be screened for audiences at what is perhaps one of the city’s biggest and most intimate film-viewing venues.

Aside from the fest’s special lineup of panels, the following full-length feature programs are among ones to be screened at this year’s Outfest:

? 100% Human (Trond Winterkjaer and Jan Dalchow)– A documentary style film with a musical twist about a girl named Monica who was actually born a boy.

? Based on a True Story (Walter Stokman)– A documentary that reconstructs the real-life events that inspired the 1975 film Dog Day Afternoon.

? Beautiful Women (Sathyan Ramesh)– A poignant drama about five actresses on the "audition from hell", who bond over a spontaneous trip that lasts well into the night.

? Both (Lisset Barcellos)– A photo album forces a bisexual stuntwoman to confront her past and come to terms with her identity.

? The D Word (Cherien Dales Naffa, Maggie Burkle and Noelle Brower)– A cheeky film that spoofs Showtime’s popular "The L Word" by taking a look at a group of gay friends living in New York City.

? Happy Endings (Don Roos)-– A hilarious, heartfelt comedy from the Opposite of Sex director that features a stellar cast including the likes of Lisa Kudrow, Maggie Gyllenhaal and Laura Dern.

? Kiki and Herb Will Die For You (Chris Gallagher and Michaline Babich)– A sassy, sharply humorous film about the titular cult cabaret duo.

? Little Man (Nicole Conn)– A moving saga that documents a lesbian couple’s struggle to save the life of their prematurely born son, Nicholas.

? Race You to the Bottom (Russell Brown)– Sexy film about a couple of people in the throes of an exotic affair.

The above titles are just a sampling of what’s to be seen and heard at Outfest 2005. To view a complete festival guide or for information about purchasing tickets to screenings, parties and other special events, visit www.outfest.org or call (213) 480-7065.