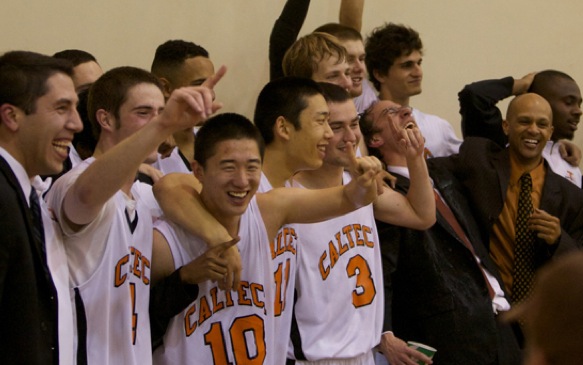 The Caltech Beavers celebrate their historic win Feb. 22.
(Credit: gocaltech.com)
It took 26 years, but all the drama leading up to their historic moment during their season finale and Senior Night was worth it.

The Caltech Beavers put an end to their 310-game conference-losing streak after defeating the visiting Occidental College Tigers, 46-45, Tuesday night in Pasadena.

“Tonight’s win is a testament to the hard work each member of this team, the alumni and the supporters have put into this program. I hope that everyone who has participated in Caltech men’s basketball is able to celebrate a little bit tonight,” Caltech head coach Dr. Oliver Eslinger states in a university press release.

With the surprising, but rather glorious victory, the Beavers improve to 5-20 overall and 1-13 in conference action. Meanwhile, the Tigers drop to 12-13 and 6-8, respectively. A total of 387 fans witnessed history for the academically well-known private school. Caltech’s last SCIAC win arrived more than a quarter of a century ago, as they beat University of La Verne, 48-47.

For the night, senior center Ryan Elmquist led the charge with 23 points, nine rebounds and four blocked shots. Although he made just four shots of the 16 attempted, Elmquist’s 15 free-throw points propelled most of his scoring.

Freshman forward Todd Cramer contributed 10 points and seven rebounds, while freshman guard Mike Paluchniak posted eight points. Elmquist, Cramer and Paluchniak were the only Beavers to not rest a single second during this affair.

So, how did Caltech overcome Occidental? Two prime reasons come to light in the stat sheet, first with the Beavers’ edge in points off turnovers. The Beavers outscored the Tigers 11-2 in this category, mostly because Occidental suffered 13 turnovers in comparison to Caltech’s five. Additionally, Caltech held an advantage with second-chance points, out-charging the visitors by 11-4. Typically, when upsets occur, these are two prime stats that winning teams control en route to a triumph. Also, they were near perfect from the charity stripe, making 19-of-25.

Now, Caltech will have to wait until next season to continue its SCIAC winning ways. “We still have goals and aspirations that we want to accomplish as a program, and this win is another step towards meeting these objectives,” Eslinger, a third-year coach, adds in the release.
Article posted on 2/23/2011
This article has been viewed 2025 times.