A Land For All Seasons: Exotic, Elegant and Eccentric, Travelers Find India Charming 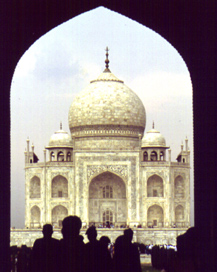 Tourists who find the Caribbean ho-hum and have exhausted the casinos in Las Vegas can really push the envelope with a visit to India.

A trip to India falls into the "adventure" category, though this is not whitewater rafting or rock climbing. The country is so diverse, so exotic, and so alien, that it’s a keen adventure in itself.

Of course, the British have known this since the beginning of last century. And though India earned its independence in 1947, most people speak English and most of the signage in the cities is in English.

The massive diversity of India can be alarming and – even for the seasoned traveler – is best seen on a tour. There are many qualified touring companies, but one of the best is Cox & Kings, who’ve been negotiating India since the 18th century. A full day’s tour in Mumbai runs about $100 per person, including lunch, a driver and guide. Cox & Kings has a handy Web site, www.coxandkingsusa.com.

To uncover the real India you need to visit the countryside. A two-hour flight north to Udaipur transports you to the state of Rajasthan and another world.

Here the Maharana (as he’s called) still presides. He operates three hotels, two of them in the massive City Palace, built by his ancestors in 1567. A three-hour tour of the City Palace is barely enough to absorb the architecture, the workmanship and the murals.

There are several luxury hotels in Udaipur, but the Udaivilas Resort is a hotel so breathtaking that you’d swear you’ve stumbled onto Xanadu. Situated on 50 acres that overlook Lake Pichola and the City Palace, each room sports its own semi-private swimming pool, a 24-hour butler and a staff that remembers how you like your coffee. Deluxe rooms run $450, not a bad price for living like a maharajah. For more information: www.udaivilas.com.

About 70 miles northwest, winding through the Aravali Mountains, lies the tiny village of Ranakpur and its famous Jain Temple. Jainism is a branch of Hinduism whose adherents so devoutly believe in non-violence that some priests wear small masks to avoid killing insects they might breathe in.

Not only is the temple constructed of more than 1,000 hand-carved marble columns, it’s a gathering place for the people of this rural area; women in colorful saris, men in chunky turbans (the color defines the mood of the wearer) and Jain nuns garbed in pristine-white.

The road to Ranakpur was, at one time, part of the silk route. And traveling this two-lane highway is like slipping back in time. Here you’ll see women balancing jugs of water on their heads, bullocks drawing water from hand-dug wells to irrigate the fields and jubilant grooms celebrating an impending marriage. Here in the ‘real India’ you’ll also spy camel caravans, village witch doctors consulting on a case and Gypsies (who originated in India) plying their blacksmith skills. The trek to Ranakpur is worth the entire trip to India.

From Udaipur farther north lies New Delhi, the seat of the government, which boasts the famous Red Fort, Jama Masjid, (the largest mosque in Asia), Humayun’s tomb and a gigantic flea market that sports far more people than fleas.

A two-hour express train trip from Delhi will speed you to Agra and the world-famous Taj Mahal. Built by a Mughal emperor as a mausoleum for his dead wife (he had three of them), the Taj is one edifice that actually lives up to its press. Carved of white marble (on top of brick) with inlays of semi-precious stones, the Moorish structure is absolute perfection from any angle.

The Amarvilas Hotel in Agra is another "pleasure dome" with a breathtaking view of the Taj from every room. Web site: www.amarvilas.com.

For something completely different, a four-hour-plus Jet Airways flight from New Delhi (with stopovers in Mumbai or Bangalore) takes you to the state of Kerala, and the town of Cochin – also called Kochi – at the southern tip of India. With 98 percent literacy, a third of the city Christian, a unique language, and occasional Communist rule, Cochin is the thriving commercial capital of Kerala.

Once occupied by the Portuguese, the Dutch and the English, the coastal town still offers spontaneous fish auctions on the sand and fabulous seafood. Rare cantilevered fishing nets – copied from the Chinese – dot the coastline.

- Immunizations: Check with your doctor or the Center for Disease Control (www.cdc.gov/travel) regarding the necessary immunizations for travel to India.

- Security: Observed as in any international site, but India has one peculiar rule: no loose batteries on domestic flights in your carry-on luggage. The batteries can be IN your Palm Pilot or computer, or may be packed in your checked luggage.

- Electricity: 220 volt, most outlets require a three-pronged adapter. Better hotels provide both adaptors and step-down transformers for western appliances. It’s wise to take a flashlight in case of a blackout.

- Crime: Visitors are considered guests and few crimes are perpetrated against them, though be prepared to be a curiosity, especially in Agra.

- Beggars: Aggressive in the cities. If you give to one you will be inundated.

- Customs: Shorts and bare arms are discouraged in mosques. Some mosques require you to shuck your shoes (you may usually wear socks). You are often charged an extra fee to take in your camera and video cameras are usually NOT permitted.

- Tipping: Taxi drivers are not tipped, though a tour guide and driver should get about $5 a day at the end of the tour. Taximeters in Mumbai have not been updated to the new value of the rupee.

- Train travel: The express from New Delhi to Agra takes two hours, but is tricky without a guide. No stations are announced and you have exactly three minutes to disembark in Agra. Do not eat the food provided with the first class ticket.

- When to go: Best time is October through March to avoid the monsoon and intense heat.

- Getting there: Singapore Airlines has a new flight from Los Angeles via Singapore to Mumbai. There are also flights via Singapore from Newark and New York. Business class offers 27 x 78-inch seats and 60 movies for the 17 1/2-hour flight from L.A. The Singapore Airport has been deemed the best airport in the world for the past 13 years, and it deserves the accolade. The tourism office offers free city tours of Singapore if you have a long layover. Check at the information desk.

- Restrooms: Surprisingly clean in India’s airports. They usually have both Indian toilets and western toilets.

- Visas: Visas are required for India. Apply at your nearest Indian consulate, cost is $60. Or you can utilize travel expediters at Travel Document Systems Inc., www.traveldocs.com. The expediters charge an extra $45.