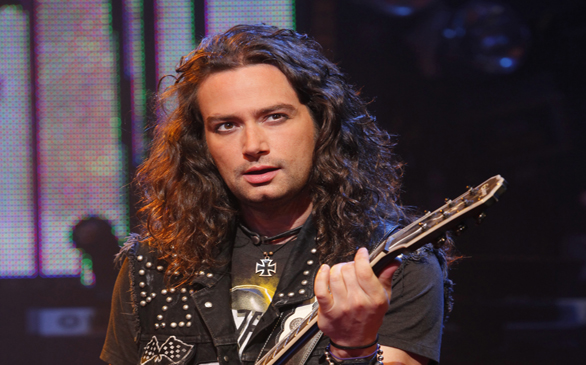 He rocked on “American Idol,” he rolled on over to Broadway and now this rock ’n’ roller has landed in Los Angeles. Tony nominee Constantine Maroulis stars in “Rock of Ages” at the Pantages Theatre.

“Rock of Ages” is a collaboration of hit songs from the mid to late ’80s that celebrates the best of the decade’s music, culture and lifestyle. The musical features epic songs from ’80s icons Journey, Foreigner, Styx and more.

“That’s what’s great about our show,” boasts Maroulis. “It’s a Broadway show but we do appeal to a wide audience, the nontraditional theatergoing audience, and I think it’s awesome. I think it makes for a great dynamic and a great energy.”

“Opening night in these cities [on tour], you have subscribers that go to everything from ‘The Sound of Music’ to ‘Wicked,’ and they’re there to see ‘Rock of Ages.’ But by the end of the night, like we say in the show, they’ll be making out with each other and waving lighters and singing Journey songs. So we definitely unite audiences,” he shares.

After originating the lead role of Drew on Broadway in “Rock of Ages,” Maroulis stepped straight into the role on tour. He rehearsed for the touring cast during the day while performing on Broadway at night up until the day he left to open in Chicago.

And he isn’t exactly exaggerating. When this rock star finds time to rest his voice is unknown.

The singer plays Drew in the touring musical, writes and records original music for his upcoming album and has developed his original solo concert, “A Night at the Rock Show,” which he is developing for a television special.

Maroulis’ album could be completed in 2011, but he says, “I’m sort of taking my time with that. I’ve been busy working as an actor.”

“It’s nice be in ‘Rock of Ages.’ It has been an awesome extension of my music. I love getting to perform new songs all the time,” he says.

“To jump in the studio to work on original music then get on stage at night to do ‘Rock of Ages,’ it’s been a blessing really. I’ve been busy and I’m thankful,” he adds.

And while many touring performers can barely find the time to sightsee in the cities they visit, Maroulis performs a whole other solo show on the side of “Rock of Ages.”

“It’s my celebration of the rock song bands. There’s no script and characters, but it’s a sort of true-to-form concert extravaganza,” tells Maroulis. The evening is complete with multimedia, guest stars and an orchestra.

“The whole experience has been pretty awesome for me,” he says.

Maroulis is also a partner and artistic director of Sweetfire Recording Studios in Brooklyn.

This “American Idol” finalist-turned-Broadway star will not soon forget just what jump-started his lucrative career.

As a finalist on the fourth season of “American Idol,” Maroulis toured with “Idols Live.”

“To get out on stage in front of 15,000-20,000 people at the Staples Center or wherever was pretty awesome I must admit,” recalls Maroulis. “And who knows if I’ll ever get back to do that ever again, so it’s something I’ll always remember and cherish.”

Although the crowds are somewhat smaller at the Pantages, Maroulis is no doubt cherishing his time with “Rock of Ages.”

“My favorite part of the show is every night I get to go out there and perform. And as soon as I hear that overture of rock, I get to go get pumped up backstage with my cast and my mates. I like going out there and feeding off that audience and just letting it rip,” says Maroulis.

“The show basically began in Los Angeles, so we’re excited to bring it home for the first time since it has become a big Broadway hit,” Maroulis explains.