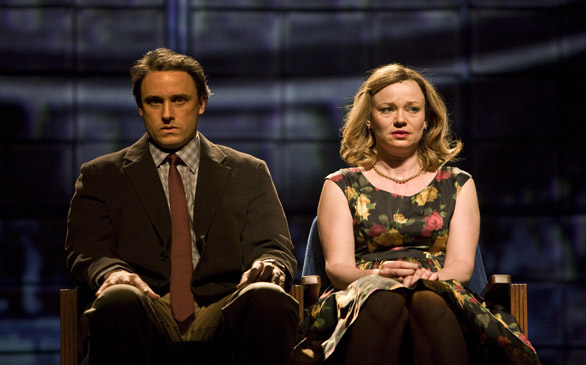 Moisés Kaufman’s brilliantly written “33 Variations” follows contemporary musicologist Dr. Katherine Brandt (Jane Fonda) as she obsessively unravels one of classical music’s most perennial mysteries: In 1819, Ludwig van Beethoven (Zach Grenier) declined an invitation to compose a variation of a simple waltz, but then immediately reversed his decision. He spent the last years of his life going a little crazy, going a lot deaf and composing not just one, but 33 different variations of the waltz he initially called a “cobbler’s patch.” Why the Maestro became so obsessed with these variations has confounded musical scholars for over 200 years.

The elaborate set designs traverse locations and eras from the Brooklyn Bridge to Beethoven’s bedroom, an innovative feat well accommodated by the Ahmanson Theatre. The lighting effects are sensational, and the constantly dynamic scene changes are pure magic – depicting radically divergent settings with such sudden and clever transitions that a large part of the play’s appeal could be credited solely to its stagecraft sorcery.

While showpieces of this production quality are often rife with talent, the stars here were the supporting cast. As Fonda’s character chases her obsession around the world, she is in denial about her deteriorating health. Crippled by her disease, she is pursued by her concerned daughter (Samantha Mathis), who is pursued by her awkward nurse (Greg Keller). Keller’s bumbling flirtation absolutely delivers the production’s best laughs and most memorable performance. Similarly, while Grenier’s portrayal of Beethoven’s decomposition is masterful, the character would be flat were it not supported by the harmonic chemistry between Beethoven’s personal assistant, Anton Schindler (Grant James Varjas) and the pompous publisher Anton Diabelli (Don Amendolia).

These two stories of obsession galvanizing human creativity against – or maybe in spite of – inevitable death dovetail with utterly ingenious savvy. The play’s plot is as interesting as its dialogue is sharp with no shortage of scenic and auditory stimulation – a very fitting sensory experience for a show about, infused with and starring Beethoven’s “33 Variations.”