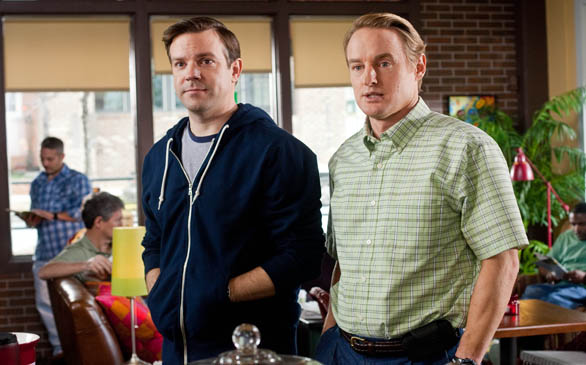 When you’re a kid, a hall pass means a few minutes of glorious freedom spent away from the classroom. As an adult, a hall pass includes stoned rounds of golf, binges at Applebee’s and Google searches for pickup lines … at least if you’re in the new Farrelly brothers movie, Hall Pass.

The film stars Owen Wilson and Jason Sudeikis as married best friends whose wives, played by Jenna Fischer and Christina Applegate, grant them “a hall pass”; a weeklong opportunity to do whatever they want, with whomever they want, with zero consequences and it’s all fun and games – until their wives start enjoying some extracurricular activities as well.

The Farrelly brothers, known for films like There’s Something About Mary and Dumb and Dumber, call their latest offering “a chick flick,” and say they knew from the first moment they heard the concept it would be a hilarious fire-starter topic ripe with comedy.

“I do believe in the concept of love, marriage and monogamy, but I like that the commercial alone causes some sofa discussion and pillow talk of, ‘Honey, what would you do it I gave you that?’ Marriage is in an interesting place with the high divorce rate, people talking about the sanctity of gay marriage and rampant cheating with Tiger Woods, the Internet and [Congressman] Chris Lee,” he says, posing as if shirtless with a cell phone cam. “I like that it raises the question.”

In order to appeal to filmgoers of the fairer sex, the Farrellys turned to their wives for input, as well as several well-known female comedy writers whose names Sudeikis rattles off like he’s taking attendance. “Laura Kightlinger, Morgan Murphy, who writes for ‘Late Night with Jimmy Fallon’...”

“You’re like a database,” Wilson laughs as Sudeikis licks his finger, marking notches in the air.

“It is a chick flick,” Wilson continues. “[The Farrellys] would often say that to me; that we were making Mystic Pizza meets The Traveling Sisterhood of Ya-Ya,” he chuckles.

Considering if you remove the first letter of the two words in the title, you’re left with All Ass, and there are multiple scenes featuring feces, a Farrelly brothers chick flick walks a very fine line between shock and humor, but that never made the actors uncomfortable.

“Maybe from growing up with brothers, [that’s] the type of humor I respond to,” Wilson shrugs.

“When you’re a little kid and you daydream about what making a movie would be like, what you’re daydreaming about is a Farrelly brothers movie,” Fischer says. “Their set is so fun and easy. It made me feel the way I’d always wanted to feel on a set. And, luckily, I didn’t have to do anything too insane.”

Once the men in the film are granted a hall pass, they head to Applebee’s to try to pick up chicks. In real life, where might the cast go trolling?

Once the group’s laughter subsides, they offer their suggestions for places to meet men, including Home Depot, the golf course, or Sudeikis’ pick, “strip clubs.”

And if they were granted a hall pass, who might they use it for?

“Hmmmm, 1967 Raquel Welch?” Sudeikis offers. “Can I use it that extensively? Can I use it with a time machine? Oh, who am I kidding? I’d take 1997 Raquel Welsh. I’d take 2007! Not today though, not today. That would be disrespectful. I’d take Helen Mirren now.”

“I think of more where you’d want to go—”

“Like on her body?” Sudeikis volleys, cracking Wilson up.

Only Fischer balks at the suggestion.

“OK. I’d use mine with [your husband] then,” Sudeikis says.

“That would not be uncomfortable at all,” Fischer smiles.