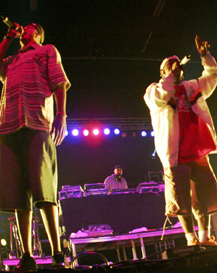 Entering the parking lot of the NOS Events Center in San Bernardino, Calif., one could already feel the rhythmic vibrations of what was ahead. The ninth annual Electric Daisy Carnival, hosted by Insomniac – one of the biggest event promoters of its kind – brought free carnival rides to all attendees and hosted a slew of electronic artists playing and spinning many different beloved genres.

Ferry Corsten, Junkie XL, The Crystal Method, Charles Feelgood and Planet of the Drums are just a few of the big timers that laid down tracks. Hip Hop moguls Jurassic 5 and the ever-popular Ozomatli graced the stage along with the addition of indie rock acts such as Autolux, The Donnas and Moving Units, new this year to the carnival.

The carnival was divided into five areas of listening pleasure: the Kinetic Field, Circuit Grounds, Neon Garden, Bass Pod and the lakeside Cosmic Meadow. Upon entering the venue, attendees were greeted by the jackin’ funk house grooves of Doc Martin who finished off the night in style, extending his set to accommodate a tardy Kaskade.

Inside, the radiant blue laser light filled the Kinetic Field as Junkie XL kept the party hoppin’ with his live PA set. His 140 BPM Tech-goodness instructed partygoers to "Take the red pill, take the blue pill," which most had already done. He then finished his set with a floor pounding rendition of the Beastie Boys’ "Fight For Your Right," which had the crowd cheering and chanting along.

Immediately following Junkies’ bow to the crowd, Scott Kirkland rushed to the front of the stage with partner in crime Ken Jordan in the foreground, introducing the duo as "The Crystal Fu**ing Method!" and then instructing the crowd to "go fu**ing crazy!" Everyone did. Opting to go out equipped with only records and no live equipment, The Crystal Method proceeded to amaze the sea of dilated pupils and kept the glow sticks swinging, bumpin’ tracks off their new mix album Community Service 2, followed by a tech-break mix of Luscious Jackson’s "Naked Eyes."

On the other side of the grounds, the 10-member-strong Ozomatli played to a smaller and more intimate crowd than usual. They played jams off their self-titled debut album, along with tracks off their most recent album Street Signs. Highlights included the crowd favorite "Como Ves" and "Saturday Night," featured on the ever popular iPod commercial.

Jurassic 5 finished off the night headlining the main stage, but their six members were cut down to five. Cut Chemist, everyone’s favorite hip-hop DJ, was out for the night leaving DJ Nu-mark with double duty. Though short a member, J5 didn’t seem to skip a beat, appropriately starting off the set with "This Is," the first track off their second album Power in Numbers. The J5 fans were ready to roll.

After DJ Nu-mark showcased his impeccable turntable skills, Chali 2na took it back a few years by setting it off with "Quality Control" off their first full-length album of the same name. J5 also unveiled a couple new tracks, leaving the crowd with something to look forward to on their next album.

Overall, Electric Daisy Carnival was good times with a few minor disappointments. Though the ticket prices were high, the lineup was superior. Stay tuned for next year – most fans will surely need the time to fully recuperate.