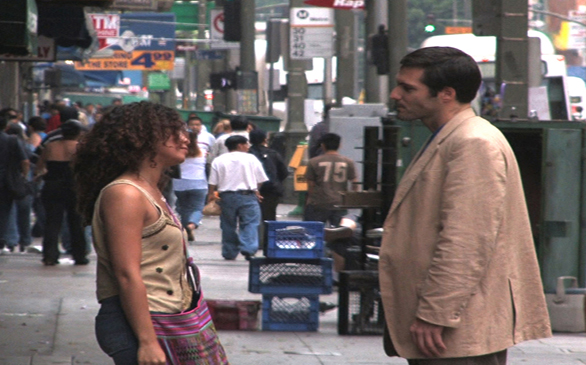 The United States has been puritanical in its views on sex in film. But Now & Later, directed by Philippe Diaz, proves that nudity and uncensored sexual conduct can move a story rather than become a distraction.

Now & Later opens with Bill (James Wortham) running from the LAPD with the help of his former driver, Luis. The exchange between the two sets the tone for the whole movie; Bill does not understand why someone would help another person if there were nothing to gain from it. Bill slowly begins to understand this concept after he meets Angela (Shari Solanis), a free-spirited illegal immigrant who happens to live on a rooftop in East Los Angeles. She is full of philosophical whimsy and political outrage against the United States government and what it stands for – what Bill stood for.

With Angela’s help, Bill begins to break through his notions of sex as a completely self-contained action rather than as a way to help live life. Angela feels that sex should be experienced to its fullest, a philosophy that she keeps true to in life. Life, as well as sex, should be taken as it is rather than fretted upon.

The sex scenes are not gratuitous, but show a relationship where sex allows a severely closed-off man to talk about how he feels. While the ending remains ambiguous about the future of both leads, there is a certain satisfaction in knowing that their lives have been changed due to the other. Now & Later provides an intense perspective of the sexual relations of a newly formed relationship and a mind-opening view of the United States’ influence over smaller countries.