Of Gods And Men 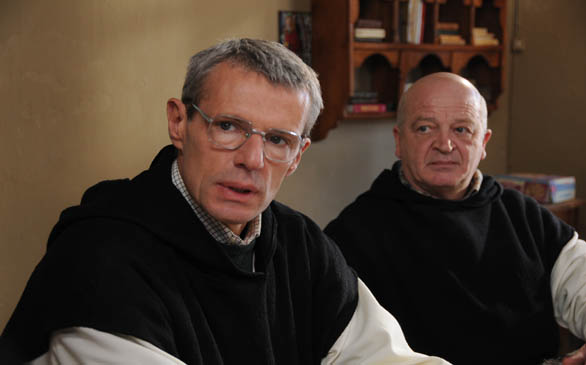 This film claims to be loosely based on the tragic kidnapping and murder of seven French monks of Tibhirine in 1996. At the time, Algeria was waging a bitter and bloody battle within its own country between the government and an extremist terrorist group that wanted power. The death of these Catholic figures in a predominantly Muslim community had an unbelievable effect on the country and the religious community at large.

The events happened, but little is actually known about the monks, like how they were taken and, more importantly, how they lived. Of Gods And Men, as I said before, claims to be loosely based on this historic reality. However, the film may not be too far from the truth after all. The monks, led by one of their youngest members, Brother Christian (Lambert Wilson), are the ties that keep the small Algerian community together, acting as doctor and counselor for the locals who are regularly treated for their illnesses and given shoes when they have no money.

The seven brothers of the church are positive, reassuring influences on the innocent people who are dragged into the battle. The monastery is somewhat isolated from the town, which allows the monks to lead a natural, calm lifestyle. For the majority of the film, this is exactly what they do. The audience is exposed to the sometimes tortuously slow rituals and daily happenings of a monastery. In fact, by the end of the 120-minute film, it felt as if I had sat through Sunday mass.

After much debate and consideration, the men decide to remain with their people instead of leave the country and escape from danger. They firmly believe that they shall live if it is God’s will. When their fateful end finally does come, it is not so bloody or violent. We are even allowed to harbor the clinging hope that maybe they will make it out alive. But as they walk off with their captors into the snowy mountains, history remains steadfastly true.

The film is slowly paced and often frustratingly simple. The religious overtone is heavy handed, even for a movie about French monks. However, there is a scene near the end that nearly redeems the prior 90 minutes. Director Xavier Beauvois creates a stunning sequence that mimics The Last Supper with cinematic beauty and emotive grace. Of Gods and Men is a gentle story that won’t ruffle any feathers, but that makes a small statement about the power of good.

Of Gods And Men releases in select theaters Feb. 25.