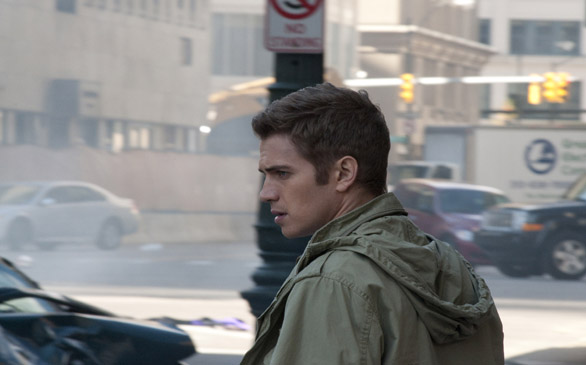 Director Brad Anderson offers another eerie, thought-provoking film in Vanishing on 7th Street, which will make you question an overlooked daily occurrence: the dark.

The film begins in a crowded movie theater on a typical night. Paul (John Leguizamo) is a theatre projectionist working the machines when the lights go completely black. Once the lights come back on, the theater is empty, and all that remain are peoples’ clothing and personal belongings. There are no bodies to be found.

Vanishing on 7th Street, set in downtown Detroit, ultimately finds four people struggling to survive and fight off the unknown and a growing darkness. The survivors find the last bit of remaining light in a bar powered by a gasoline generator. Paul, Luke (Hayden Christensen), a TV news anchor, Rosemary (Thandie Newton), a physical therapist and James (Jacob Latimore), a young tween are left to figure out why they were chosen to live. They question what everything means while fighting a faceless enemy. In the menacing darkness, all they see are shadows and hear are disturbing whispers.

A few times during the movie, I was reminded of films like I Am Legend and 28 Days Later, where the survivors wake to find emptiness and chaos while trying to search for answers. Though there are no new, exciting twists, Vanishing on 7th Street manages to remain spooky throughout. The film has moments of suspense and dread but leaves too many unanswered questions.