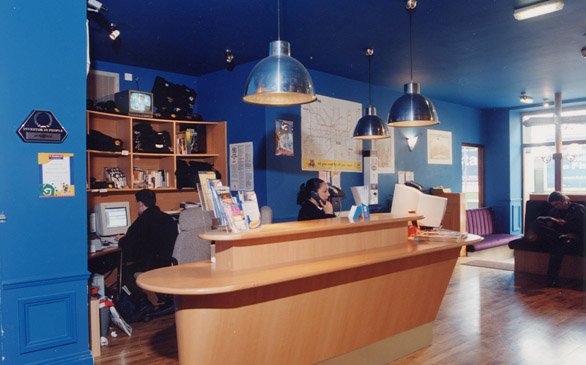 A Hostel Site Just For You

If you want to see the world and do it cheaply by staying in hostels but are afraid of what you might be getting yourself into, here’s help. Hostelworld.com separates hostels out by type and what activities are available nearby so you can find just what you want. If you’re interested in partying, the site will direct you to places like St. Christopher’s Village in London where the hostel has its own bar with DJs, karaoke, big screen TVs and good food. Traveling without the guys? Find places like Base Auckland in Auckland, New Zealand, where they have a “girls only” floor with all the comforts of home as well as security measures in place. And if you’re a lone wolf looking only for a place to bed down and be left alone, you can find that too.

Tripping is the name of a new social networking platform that helps travelers find locals who want to meet up for a drink, play tour guide or even provide a spare room or sofa, making it no longer necessary to pay for hotel lodging. The site is free to use and has a number of security features in place, including references and ratings, video validation and an emergency hotline number. Tripping already has members in over 100 countries, and many organizations, including universities, have set up networks on the site to help travelers connect with like-minded individuals that are into specific activities like golfing, attending concerts or hitting the best restaurants and clubs. tripping.com

If you’re thinking of purchasing a Eurail Pass in order to travel all over Europe economically, here’s another money-saving idea for when you get off the train. The Leisure Pass Group has sightseeing passes for major cities, including Paris and London, that gain the pass holder entry to major attractions as well as discounts on dining and shopping. A one-day pass for London costs about $70 and is good for entry to the Tower of London, St. Paul’s Cathedral, Windsor Castle, Wembley Stadium tours, a Thames River cruise, the London Bridge Experience and nearly 50 other attractions. Passes allow for priority access at some sites, come with a city guidebook, are good for one year from date of purchase and are backed up with a 100 percent money-back guarantee. leisurepassgroup.com

This year is the 20th anniversary of the founding of the Lollapalooza Festival, and organizers are rocking out their second decade of existence with a special South American version of the festival in Santiago, Chile. Lollapalooza Chile takes place on April 2 and 3 and will feature headliners the Killers, Jane’s Addiction and Kanye West along with an all-star lineup that includes 30 Seconds to Mars, Deftones, Fat Boy Slim, Ben Harper, Yeah Yeah Yeahs, 311, the Flaming Lips, CSS and dozens of others.

“We picked Santiago for our first overseas outing because of its open space and its variety of cultural offerings, and because locals have a passion for contemporary music,” says Lollapalooza founder Perry Farrell, adding that the idea is for the event to take root in Chile and become an annual affair.

A wide variety of Chilean talent will also appear. The full lineup and ticket information is available at lollapalooza.cl/english.

The Ultra Music Festival (ultramusicfestival.com) takes place at Bicentennial Park in Miami March 25-27; confirmed acts include Tiesto, Deadmau5, the Chemical Brothers, Duran Duran, David Guetta, Moby, Empire of the Sun and many others.

Rock on the Range 2011 (rockontherange.com) rolls into Columbus, Ohio, May 21-22 with a cast of heavyweights, including A Perfect Circle, Korn, Disturbed, Stone Sour, Danzig, Staind, Avenged Sevenfold and many others with Fuse TV’s Juliya emceeing the whole deal.

Well, you can still cyber travel. Check out the Brandenburg Gate in Berlin, a perfect real-time sunset in Key West or virtually any other place in the world by logging on to webcamtraveler.com.