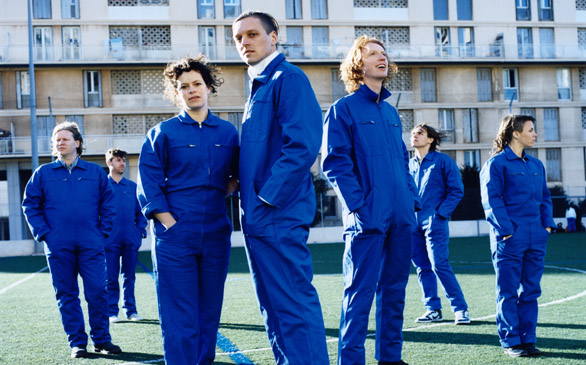 At 12:40 a.m. Thursday morning, two buddies of mine and I decided on a whim to wait in line in front of the El Rey Theatre on Wilshire Boulevard until noon for Arcade Fire tickets. It was a secret show, and they had announced hints via Twitter of where the tickets might be on sale. Mind you, I had already been up since 9 a.m., but I decided, what the hell, you only live once. We knew we were in for an adventure. How could we miss an opportunity like this: to see Arcade Fire in an intimate setting? Oh yeah, and it was only $30! So we arrived at the El Rey at approximately 2:30 a.m., when the delirium and blissful anticipation began to set in.

I was 60th in line, next to some really cool dudes from USC and UCLA. We talked all night – music, football, fútbol, literature, school, politics, life, aspirations – shared munchies and drank wine. At 5 a.m., we walked to Starbucks to pee somewhere other than a bush and get some caffeine and pastries for the long day ahead of us.

The weirdest part was the mutual friends I discovered that I had with at least three of the people in line. I guess it’s a small world – a small world indeed, with many people inhabiting it. I mean, to think that 60 people alone would show up to camp on a sidewalk to buy tickets for a concert, two hours after it had been announced where the tickets would be on sale. I found it pretty incredible that wherever you are, you’ll find that one person is not that different from another.

These were the die-hard fans – the fans I grew to know in the 11 hours that we spent in both the 40-degree cold night and the blistering, 80-degree sun while the citizens of Los Angeles honked and laughed on their way to work. Although the laughing fools were probably witnessing complete insanity, they understood little concerning the motivation behind our antics: Ticket agencies and promoters are completely corrupt, corporate monstrosities. The fact that scalpers can buy six tickets to Coachella (not to mention all the campsites) and make the real fans pay up to 200 percent of the originally priced ticket ($75 car campsites were going for over $600 on craigslist at one point). A scalper told me he’d pay $200 for my two $30 tickets to the Arcade Fire show. I told him to piss off. If there were anyone I was going to sell my ticket to, it would have been to a friend or another fan who waited nearly as long as I did to see the band perform.

The best part about the way the show was run is that the ticket booth asked for your name and ID, and put it on a list to confirm your identity when you tried to get into line at the show. So the legitimate fans that waited in line couldn’t get robbed or bought off buy scalpers, no matter what they offered, because the true fans’ names were on the list. Besides, nobody who waits in line for 11 hours, without sleep for 30, is about to waste his time or energy on giving a scalper his ticket, when he could see the greatest concert of his life for himself.

So around 10 a.m., I watched the line quadruple around the block and started getting roasted alive. Finally at 12:30 p.m., I was assured that a guest and myself would get into Arcade Fire at 7:30 p.m., location: Ukrainian Cultural Arts Center(?!) – a  building the size of where your friend’s Bar/Bat Mitzvah was held or your local YMCA basketball gym. The point is, we got in at 7:45 p.m., and we were finally 15 feet and an hour and a half away from seeing Arcade Fire.

They immediately started at 9:30. Every second I waited in line was worth the hour and 45-minute set. The sound was incredible. Everybody in the band played perfectly in sync and sounded more energetic than on the record. The band mates were going crazy on stage, just as the crowd danced and sang along to every song. The energy was incredible (My eyes got watery during “Wake Up.”). Overall, the experience was unforgettable, and if I had the chance, I’d do it again in a heartbeat. In conclusion, congratulations to Arcade Fire for winning the Grammy for Album of the Year! It made the show much more memorable and worth my time.