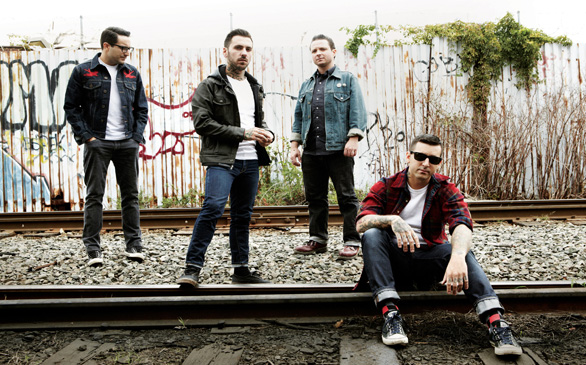 “We spent a long time grinding it out in vans, playing to nobody. If we were going to sell our souls, we would’ve done that a long time ago. I don’t think anyone needs to worry about that,” says Bayside frontman Anthony Raneri.

Taken out of context, Raneri’s words may sound ever so slightly defensive, but the singer is nothing if not secure with his band’s success.

With 10 years together under their collective belts, the foursome of Raneri, bassist Nick Ghanbarian, drummer Chris Guglielmo and guitarist Jack O’Shea have a long list of accomplishments and have established themselves as one of the staple bands of the modern punk scene.

So they did what any logical band would do and decided to shake things up a little bit.

After completing their contract with Victory Records, the band found their next home on Wind-Up Records, known for breaking other punk rock icon bands such as … Nickelback and Evanescence? Counterintuitive as it may seem, the task of label hunting was as weighty as any other band decision.

“We wouldn’t play demos for the labels when we were shopping around, even though we had them ready,” says Raneri. “That was our thing. We didn’t want someone to sign a song or sign a record. We have a 10-year history with four records and thousands of shows on our resume. Sign us for who we are, or don’t sign us at all.”

With a label head and backing team that were already in the Bayside camp beforehand, Wind-Up proved to be the right fit for Raneri and his band mates, which is why he’s so vocal in shooting down the concept of label associations.

“We don’t really know what kind of band we are,” he says. “We never really felt like we fit in on Victory despite it being an indie punk label.”

Along with their new label, the band opted to take a new approach to album writing when they began working on Killing Time, their fifth studio album and follow-up to 2008’s Shudder.

“We spent the entire last year working on our record, which is kind of nuts because we’ve always only spent six weeks working on a record whenever we could find gaps in our touring schedule,” says Raneri. “This time we just said we were writing and recording indefinitely, not booking any shows or tours until the record’s finished, and we made by far the best record we’ve ever done.”

Given that they were taking significantly more time on the album than on any previous one, there was no doubt that it would have to be an ambitious one for the band.

“We just knew we didn’t want to bite off more than we could chew and half-ass it with this album, so we decided to go back to what Walking Wounded was with instrumentation and lots of left turns and surprises in songs,” says Raneri. “Being able to spend this long on it, we were able to write a song, demo it, live with it for a while, decide if every part was the best it could be, then rewrite it if it wasn’t.”

Songwriting, that was the easy part. Now the issue remains of where the album even fits into the genre, as the fact isn’t at all lost on Raneri that the face of punk has changed since Bayside first started. Though he and his band mates are the elder statesmen of the Warped Tour circuit these days, they’re also something of odd men out stylistically. But Raneri is unfazed. It’s just the nature of the industry.

“Punk isn’t mine. Warped Tour isn’t mine. Who am I to get pissed that we don’t fit in on Warped Tour anymore because we’re too punk? We did Warped for the first time in 2002 and we were too pop back then, because pop punk and emo were the devil at the time,” he says.

“It’s easy to get pissed off about where the scene has gone when you’re looking at all these pop bands that have overrun it. But punk is still happening. You’re just not looking in the right places,” he says.

Luckily, the members of Bayside make for a good place to start.