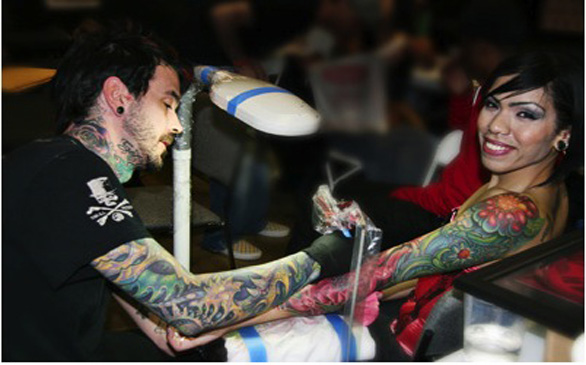 It just seems logical that tattoos and punk rock go hand in hand together. In the cultural Venn diagram, there is of course significant overlap between the two, but as far as festivals catering to them as lifestyles, it seems it’s either one or the other. Luckily, the annual Musink convention, now in its fourth year, is bringing some of the biggest and best names from both industries together for a weekend.

The three-day festival, which started in 2008, sees traditional tattoo convention-style demonstrations and exhibits from renowned and up-and-coming tattoo artists, alongside performances from both iconic and contemporary bands across the punk, hardcore and metal scenes. This year’s lineup includes the likes of the Used, Thrice, Circa Survive and Suicidal Tendencies headlining on the music front, as well as such greats in the tattoo scene as Mark Mahoney, Oliver Peck, Kari Barba, Nikko Hurtado, along with over 300 other ink-slingers.

“We tried to find bands this year that tattoo culture could identify with and who fit together, and to go for bands that are a little bit younger this year,” says fest promoter Bill Hardie, who himself got his first tattoo from Mahoney 25 years ago. “Maybe we can educate some of those younger audiences who have a few tattoos, but don’t know who the great tattoo artists really are yet.”