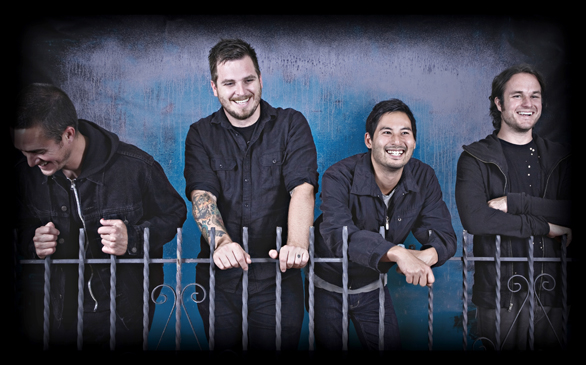 Thrice alone is worth the ticket price for Musink Tattoo & Music Festival.

Suicial Tendencies: So many kids today have no idea where their punk came from. Back when we all had to walk to hardcore shows barefoot in the frigid L.A. snow. Exactly.

Point being, perhaps it’s just the nature of music in general, but so much of the modern punk and hardcore scenes have little concept of their genres’ early days, who the progenitors were or what their movements started and stood for. Given the rich history of punk rock that Los Angeles has to offer, think of it as part of our civic duty to really get a grasp on it by seeing one of the great thrash icons play live.

Given that these dudes have been shredding it up together for longer than most of the modern bands have even been alive, you can have some assurance that they’ll give you a memorable show. Besides, how else are you ever going to be an industry elitist if you can’t rattle off Suicidal Tendencies trivia in between professing your undying love for Fugazi and Promise Ring.

Thrice: This band alone is worth the ticket price, but hey, don’t take our word for it. Just go listen to any of the band’s albums from the last 10 years if you want to hear a stand-alone masterpiece of a song collection.

With seven studio albums under their belts now, the band has evolved from post-hardcore pack leaders into something much more over the last many years. Without losing sight of their hard rock roots, frontman Dustin Kensrue, guitarist Teppei Teranishi, bassist Eddie Breckenridge and drummer Riley Breckenridge have continued to push the boundaries of what defines their sound. Playing the role of mad scientists in their scene, the foursome have effortlessly managed to integrate elements of indie, folk, soul, classical and electronic into a genre that is typically strictly piss and vinegar.

That said, just because they bring a little artfulness and class to a rough-around-the-edges genre doesn’t mean they aren’t still melting faces. Kensrue can go from soulful crooning to gut-wrenching yells without the slightest hesitation. A master at invoking both the deepest of your inner motions and the most chaotic of circle pits, Kensrue can do it all with little more than his voice. Now, when backed by Teranishi’s equally as emotive shredding, the band is all but unstoppable.

Given that the band members are all Orange County natives by way of Irvine, this is practically a hometown show for the band, and if there’s one thing this band can do, it’s put on a hometown show. Even better, the band is slated to have a new album out at some point this year, so it wouldn’t be entirely unreasonable to think there might be some new material that gets previewed. Granted, that may be more wishful thinking than anything, but hey, it’s never too early to start dropping hints, right Dustin … ?

And if you want to see some seriously awesome tattoo work on a band while you’re, y’know, at a tattoo festival, these guys have some very legit ink of their own.

Circa Survive: Now from one of the inevitably best albums of this year to what was arguably one of the single best albums of last year, Circa Survive is another band that is entirely worth the ticket price by themselves. The fact they happen to be playing the same day as Thrice means that, essentially, not going on Saturday can be filed under the “#baddecisions” hashtag.

Another band that also continues to outdo themselves with each album they release, Circa has likewise evolved from strictly defined scene parameters into so much more. While genre pigeonholing ran rampant in their early days, the band has a proven track record of artistry in their musicianship that cements them as something more timeless than the other bands in their scene.

With a vocal range you’d swear wasn’t humanly possible if he didn’t pull off every single note live, frontman Anthony Green goes above and beyond in all aspects of his musical being. From musicianship and lyricism to his stage performance, Green is a master of creating a visceral mood for an audience when he’s got a mic in his hand.

The Used: Though they’ve been out of the public spotlight for a little bit, it doesn’t change the fact that the Used still make for one of the most intense live shows in modern rock. Though they may not be as eccentric, or as self-destructive, as they were known for being on stage in their early days, these guys still bring the chaos on stage like nobody’s business.

Frontman Bert McCracken’s signature whiskey-soaked-sandpaper howls and yells capture that unique emotionality as only he can, taking his audience on the proverbial roller coaster with him every step. With lyrics that read more like diary entries, it’s near impossible to not get sucked into the band’s music and hang on each of McCracken’s words.

Hot Water Music: Just so everyone knows, there is no such thing as a bad Chuck Ragan performance. And by extension, there is thusly no such thing as a bad Hot Water Music performance. Even at their rawest, most grittiest, most concussively ear-exploding, Ragan somehow manages to emote in a way that you don’t even know he’s doing it until it really hits you. A lyrical ninja, in terms of making his songs resonate, if you will.

Intelligently written and arranged, but still somehow infectiously catchy, the Florida-bred punk band is one of precious few bands who can seamlessly reconcile the two styles while still feeling decidedly edgy. Also capturing that timelessly anthemic quality, the band evokes a classic punk vibe while still feeling very much at home with the younger up-and-comers in their genre.