"The Daily Habit": Like Chilling at a Party with Pals 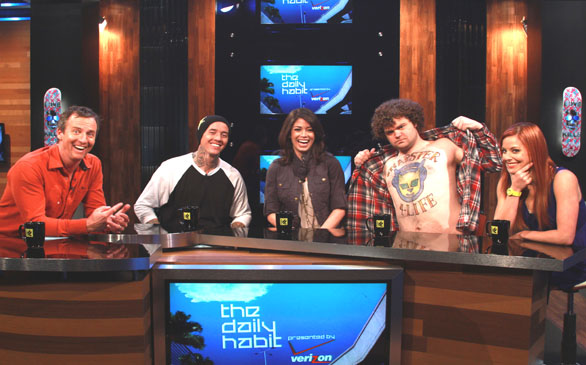 It’s a typical guys’ night. You called your girlfriend to let her know you’re busy. You have packs of beer sitting in the fridge and various munchies popped open on the table. All of your boys are gathered in the living room in their gym shorts, flicking through every channel for the third time. Now what?

For those of you who need a fresh source of entertainment to mix up your guys’ night, Fuel TV is here to present you with the perfect option. Hosted by renowned sports broadcaster Pat Parnell and produced by Scott Paridon, “The Daily Habit” is here to satisfy all of your hunger needs – whether it be sports, music, good laughs or hot girls – to go perfectly with that beer in your hand.

“It’s like a good weekend at the 901,” says Parnell. “It is a hangout, you feel like you’re hanging out at a bar with your good friends. It’s a Molotov cocktail, but it tastes like a Mai Tai and is super entertaining.” Sure enough, as a combination of extreme sports, music and comedy, “The Daily Habit” feels more like a chill conversation at a low-key kickback than a formal, host-versus-guest show.

Every night “The Daily Habit” features different guests from various fields such as extreme sports athletes, up-and-coming bands and famous actors and comedians. So far, popular celebrities like Will Ferrell, Jack Black, Blink 182 and Far East Movement have left their footprints on the set.

As a SoCal native, Parnell is the perfect host for the show because of his interest in both extreme sports and music. He combines his previous experience as a sports commentator and as a host for MTV to bring together somewhat unusual yet equally fascinating topics revolving around sports and music. In addition, he was one of the co-producers and host for a youth culture show called “Paved New World” for ESPN, which explains his ability to smoothly introduce a pop culture element to the show.

“‘Daily Habit’ for me is a complete dream job,” Parnell laughs. “I get to kick back and have conversations with my heroes growing up, whether it be pro surfers or pro skaters. I hope it lasts forever.”

What adds to the cool party vibe of the show is the panel. Comedians and panelists Jordan Morris, Hal Rudnick and Chris Fairbanks act as co-anchors with Parnell, cracking jokes here and there to lighten up the mood with comedy.

“We’re like joke providers,” says Fairbanks, who is also launching his own comedy special, “Fairly Uncertain,” this month on Fuel TV. Morris hopes that, with the panelists, the audience feels like they’re at a cool party with some friends.

The creation of the panel is not the only thing that changed since the relaunch of the show. Beginning last October, “The Daily Habit” has been taped in a brand new studio located on the Fox lot with much more space and facilities. Add to that, a live audience, “hot chicks,” funny video clips and abundant doses of comedy, and you have the perfect alternative for your guys’ night instead of watching that awesome Lakers game you recorded one more time.

“We don’t take ourselves very seriously,” chuckles Paridon. “We have girls in bikinis, we have clips that are funny, we make fun of ourselves, we make fun of other people. We can do funny things that people don’t normally do.”

It seems like all fun and silly, but the team works extremely hard to make “The Daily Habit” into a one-stop shop for all of the information that five different shows would normally contain.

“Most of the people you see on the show also work behind the scenes,” explains Morris. “We’re always messing around on the Internet and saying what we want to talk about. It’s very democratic.”

So, if you are a “dude” looking for a fun break from work, make sure to catch “The Daily Habit.” It is a perfect chips-and-salsa combo to complete your midnight cravings.