Lakers Are On Fire 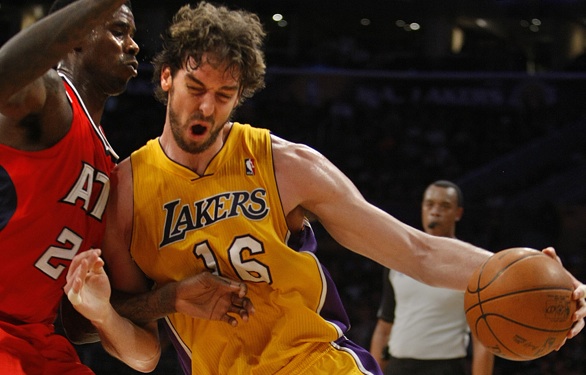 Four games. Four wins. The Lakers are back on track after a much-needed All-Star break.

Los Angeles’ current four-game winning streak has been no easy task, however, especially with their respective victories at Portland (106-101) and Sunday’s win over the Thunder in Oklahoma City (90-87).

“The rest did the guys some good. It was a chance to kind of recover, regroup and focus on the opportunity that we have ahead of ourselves,” Kobe Bryant tells reporters after L.A.’s big win in Oklahoma.

Bryant collected 17 points on a poor day’s work of shooting eight-of-22 field goals, but dished out seven assists and a critical fade-away shot in the closing seconds. Also, he moved past Elvin Hayes for seventh on the NBA All-Time scoring list.

Led by Pau Gasol’s double-double of 18 points and 11 rebounds, including five on the offensive end, the Lakers managed to penetrate the paint a lot against the Thunder.

“Everybody’s fighting for playoff position. It was a fun game, it was back and forth,” Durant says to the media. “We just didn’t come up on the winning side.”

Both Durant and James Harden had open three-pointer looks to send the game into overtime, but both attempts did not go through.

“We were fortunate to come away with that win,” head coach Phil Jackson remarks. “Two shots like they had at the end of the game were good looks. But we did the job in the second half defensively.”

The Lakers (42-19) end their short two-affair road trip, visiting the Minnesota Timberwolves (14-46) on Tuesday, March 1, at 5 p.m. and return home to face the Bobcats March 4 before heading out on a four-game road trip March 6 in San Antonio.