Mess with Students, Face a Revolution 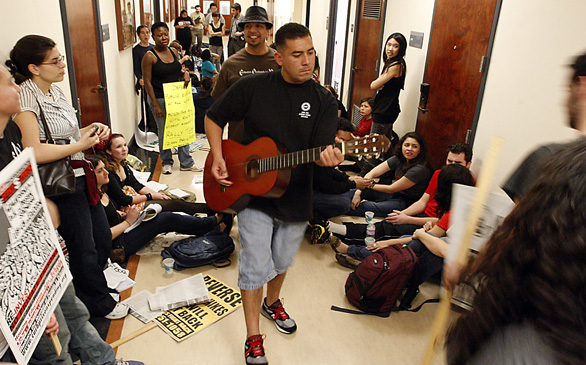 With the historic events happening around the Middle East, there is one thing many have in common: young people, especially students, leading the charge. Students from universities are taking their frustration and activism to the streets using the latest technology as their weapon; and this new weapon, you guessed it, was Facebook and Twitter. What is happening in the Middle East right now continues to be one of the most cataclysmic lessons of our time about the power of students to create social change.

Even though we saw massive student protests over rising tuition fees at UCLA last year, with hundreds of students from every UC in attendance, the general public isn’t aware of the rich history of student activism and highly controversial events that have taken place at UCLA’s campus. Since the 1960s, historic moments have included the controversial firing of Professor Angela Davis, a radical feminist with associations to the Black Panther Party and whose membership in the Communist Party had her barred from teaching at any university. There were also the murders of two Black Panther members and UCLA students Alprentice “Bunchy” Carter and John Jerome Huggins Jr. on the steps of Campbell Hall, which has attracted major news attention till this day (most recently, an effort to memorialize the event with a plaque that was barred by the University).

In the 1980s, students at UCLA erected large tent cities across the north side of the campus in protest against Apartheid in South Africa, calling for divestment of UC funds from companies that did business there. By 1985, about 55 universities had fully or partially divested from the Apartheid regime. UC Berkeley sent a particularly large message divesting $3 billion in stock holdings, one of the largest public institutions to make the message clear. This prompted Nelson Mandela, upon his release from prison, to recognize the event as a major catalyst to end white-minority rule in Africa.

By 1993, an old struggle with new direction began to circulate around UCLA’s Chicano Studies program. After organizational efforts by students to recognize Chicano Studies as its own department failed with the administration, students began a sit-in demonstration with over 200 students walking across Westwood to the Faculty Center on campus. Protests began to turn violent, and 99 students were arrested. Fueled by the recent death of workers’ rights leader Cesar Chavez, the most dramatic form of activism came when eight students and one UCLA professor went on a hunger strike. This was highly publicized by the media and attracted support from state senators and other government representatives. The event became one of the largest student and community mobilizations in UCLA’s history, and in the end brought to fruition a compromise with the administration to create the Cesar Chavez Center for Interdisciplinary Instruction in Chicana and Chicano Studies.

Even though I have described social movements anchored by students at UCLA throughout its history, this does not mean that any of these social movements is comparable to the ones happening in the Middle East. All social movements come from different places, and the tactics and stakeholders are all different. But students have an exceptional role in the ways progressive, even revolutionary ideas are spread, and that is they are able to access untapped resources and collectively gather with like-minded people in their universities.

I remember it was at UCLA that I learned the loud chants of “The people united will never be defeated” and “Ain’t no power like the power of the people and the power of the people won’t stop.” I participated with other students from various universities and Cal States, even high school students, in a fight to recognize Filipino World War II veterans as American citizens for fighting with the United States during the war. As we marched across Los Angeles’ city streets, there was a sense of nationalism and pride that I’d never felt before. A flood of emotion of both anger and excitement hung in the air as I marched with other supporters. I believe that sense of purpose and anger, on a large or small scale, has been proven time and again to be a force to be reckoned with.