Rango: Johnny Depp is a chameleon. 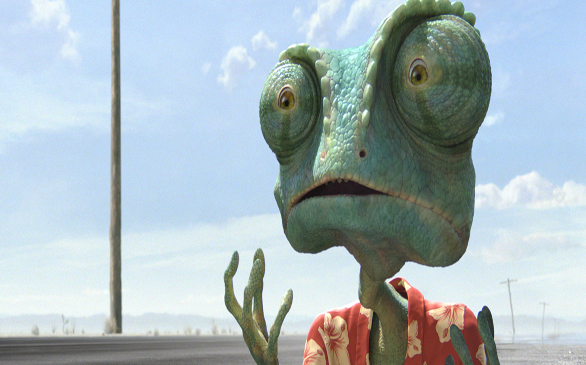 Johnny Depp is an actor so talented, he’s as believable playing a lovestruck, lonely scissor-handed teenager as he is a wily pirate. Perhaps that’s why he slips so effortlessly into the role of Rango, a chameleon in the midst of an existential crisis when his terrarium home is shattered and he finds himself in an old western town called Dirt.

Directed by Gore Verbinski, whom Depp previously collaborated with on the first three Pirates of the Caribbean films, it’s a more mature animated comedy that earned a PG rating from the MPAA. With a tip of the 10-gallon hat to Sergio Leone and a brief appearance by Hunter S. Thompson, this isn’t your usual kids’ flick, which makes sense given Depp and Verbinski’s creative point of view.

“Early on, some of the talks that Gore and I had about the character – I mean, two grown, middle-aged men discussing the possibility of one of them being a lizard – it starts off on a surreal kind of note,” Depp laughs.

Having worked together on four projects, the actor and director joke that their working relationship is based on the simplest things.

Joking aside, both agree they have a shorthand that allows them to speak primarily in “sound effects and unfinished sentences,” which makes direction like “more fuzz” or “more stink” make sense.

Depp feels that working with Verbinski allows him to “arrive at some [creative] place that no one has ever been to before. And Gore welcomes it and creates an atmosphere that allows you to just essentially go ape. It’s a blast.”

Although he will admit that when strapped into a motion-capture suit on the sets Verbinski created to give Rango and more organic feel, at times things were “really, truly ludicrous; I mean, just ridiculous. It was like just regional theater at its worst.”