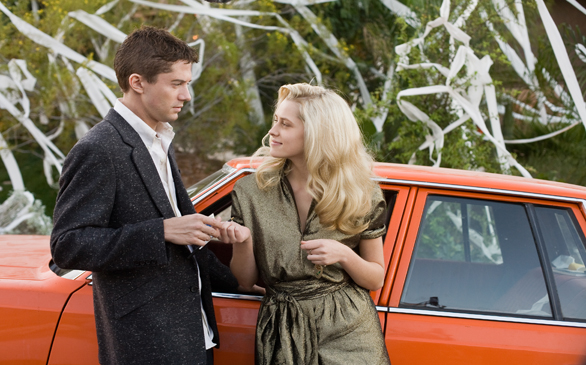 Hiking up Castle Place, a nearly vertical hill in Beverly Hills studded with multimillion-dollar estates all featuring an epic view of the haze blanketing Los Angeles (though I’m sure on a clearer day you could see all the way to the coast), I stop to catch my breath outside of the modern mansion housing the Take Me Home Tonight press day, promised to be the “Best. Junket. Ever.” After four years in cold storage, it seems the filmmakers were ready to celebrate their movie’s long-delayed release.

Starring Topher Grace, I am Number Four’s Teresa Palmer, Anna Faris and Dan Fogler (Fanboys), the film, previously titled Kids in America, follows the foursome on one wild night over Labor Day weekend in 1988. Conceived by Grace and penned by Jeff and Jackie Filgo, who wrote Grace’s star-making sitcom, “That 70’s Show,” the film was shot in 2007 but shelved by Universal who, Grace believes, didn’t know how to handle a young adult comedy that heavily features drug use and partial nudity. It wasn’t until Relativity stepped in to distribute that it was given a second life.

Sitting down with Grace, who also served as an executive producer, it seems logical to ask; how important is it to have boobies and cocaine in a comedy looking to emulate the ’80s?

“Literally imperative,” Grace replies. “It’s like oxygen. It was really important to us because we wanted to go for a really hard R [rating], mostly because that’s what real life feels like. It’s one thing if you’re making Up and you’re experiencing it through that kid’s point of view. That’s the right rating for that movie. But for something like this, if you’re in your 20s in the mid-1980s, it wouldn’t be realistic [to leave those things out.] We can’t do the Prohibition without showing people drinking.”

Rather than ape the ’80s, Grace wanted Take Me Home Tonight to pay homage to an era that’s easily caricaturized.

“We wanted to make sure we didn’t spoof it,” Grace explains. “That means the first couple of things that have to go are saying, ‘Check out this tiny cell phone!’ or ‘The CD will never take off!’”

Instead, the film is liberally sprinkled with pop culture references lifted from films from the decade, ones you can see in the background at the start of the movie when Grace is shown working as a clerk at a Suncoast video store, something he was very familiar with.

“I worked at the Stanford Mall Suncoast for two summers,” he cringes. “My theory was that I would watch movies all summer long. That’s what I was going to do anyway; I wasn’t that social at that time. Then I got there and they played one movie all day long: Space Jam. Space Jam, as you know, is one of the finest films ever made, so I was lucky to be able to watch that over 3,000 times,” he deadpans.

Playing Grace’s high school crush, the ultimate ’80s dream girl, is Palmer, who admits her allure wasn’t always as potent as it appears on screen (or off – the Aussie actress dated Grace for several years after filming wrapped).

“I had a crush on a boy – it started pretty young – I was crushing on him in grade two, and I had a crush on him throughout my entire life, pretty much until I was 15,” she reveals. “His name was Hugh Gilchrist, and he ended up being the first boy that I ever kissed, and he ignored me throughout the whole of primary school because I was such a loser. I was a socks-and-sandals girl, and I got teased awfully.”

“Wait, that’s not Australian for something? You just wore socks and sandals?” Grace asks.

“Yes. I just wore socks and sandals. That’s what people would chant at me when I was in primary school. Kind of embarrassing,” she blushes. “After I came to America and started working in film I saw him again, and he said, ‘I always knew [you’d be famous].’”

“Yeah, that’s why he ignored you for all those years,” Grace scoffs.

But what about Grace? Did he have any longstanding unrequited loves?

“Oh, I had many, and I did not kiss any of them. But I did get a sitcom around when I was 19, so that changed the playing field a little bit,” he smirks.