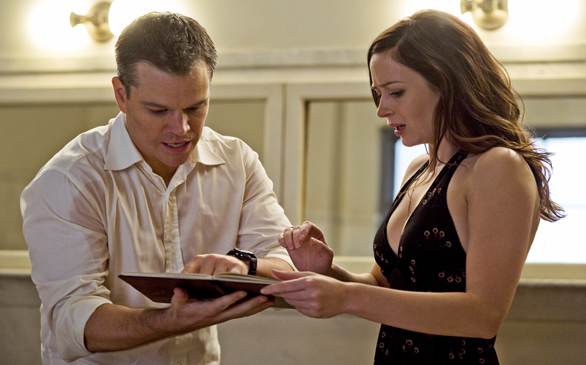 Despite trailers that make it seem like a thriller or the fact that the screenplay is based on a short story by one of the kings of science fiction, Philip K. Dick, The Adjustment Bureau is one of the most unapologetically romantic films to hit theaters in some time.

Matt Damon stars as David Norris, a promising young politician, sort of a John Edwards-meets-JFK Jr. type, who has a chance encounter with Elise (Emily Blunt), a beautiful, free-spirited dancer, on the eve of a major campaign loss. Disarmed by her unbridled vivaciousness and quick wit – Blunt seems to be playing an updated version of Ali MacGraw in Love Story – David’s infatuation is instant and all-consuming, even when he’s told repeatedly by a team of scary looking agents in retro suits and hats, the adjusters of the Adjustment Bureau, to stay away from her.

The film, directed by George Nolfi, who co-wrote The Bourne Ultimatum as well as the script for this movie, which is his directorial debut, strives to be a sci-fi romance mixed with social commentary about the place of politics in society, the validity of free will and an answer to the age-old question, “Why didn’t that cute guy I gave my number to ever call?” With so many irons in the fire, The Adjustment Bureau can lapse into moments of muddled exposition or pedantic metaphysical postulation, but Damon and Blunt’s lively chemistry quickly save it. Their pairing proves to be so dynamic, it can verge on the sparks ignited by Katharine Hepburn and Spencer Tracy or Clark Gable and Claudette Colbert.

If carefully dissected, The Adjustment Bureau certainly isn’t without flaws, but it succeeds thanks to great actor pairing, Anthony Mackie’s winning, heartfelt performance, a thrilling, mind-bending final chase sequence and the film’s central conceit; that destined love can’t be denied.