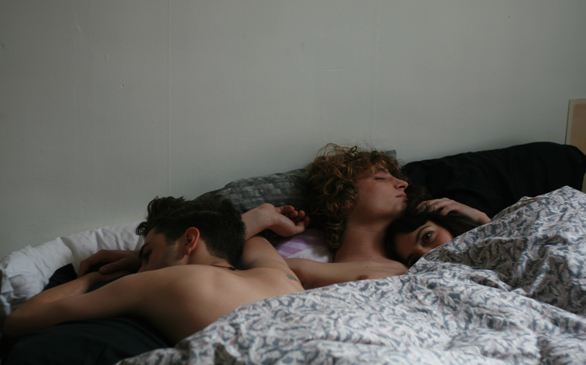 You have two girls, one boy – a typical love triangle. Now, replace one of the girls with a sensitive gay guy, add a layer of thick cigarette smoke and unexpected bursts of random soundtrack and you have a film primarily made up of scattered puzzle pieces that solve themselves through Xavier Dolan’s brilliance.

Francis (Dolan) and Marie (Monia Chokri) are best friends whose obsession with God-like Nicolas (Niels Schneider) throws them into a desperate fit. They go behind each other’s back to win Nicolas’ affection, but Nicolas is nothing but interested in reciprocating the love to anyone; he is all about “playing the field.” The two friends grow increasingly wary as they begin to realize they are becoming monsters in the name of love, or more like, lust. Nicolas simply sits back and watches the spectacle of Francis and Marie’s pitiful struggles, all the while enjoying the attention they shower him with.

“Heartbeats” reveals every kind of human emotion one can possibly feel when it comes to love – infatuation, lust, jealousy, hatred and many more – in the ugliest and the most uncomfortable way. It shows the audience how far one would go for love, and frankly, it stings, because we have all been there, mentally or physically. Whether we have stepped all over a precious friend or completely stripped off our true selves to win someone over, we know firsthand that love is never quite beautiful and pure.

Just as every move is crucial in the game of love, every detail counts in this movie. The music, the colors, the gestures – they all reveal some sort of a clue to where the characters stand. It may get a bit confusing at first, with all the details and the subtitles and all, but picking up on little clues that Dolan hid here and there is one of the perks of watching the film.

Dolan’s and Chokri’s performances are truly dazzling. They convey their emotional turbulence through their eyes, which rotate between those of a triumphant champion with Nicolas’ attention and those of a malicious beast when they fail to secure it. Although the two characters play very different roles – Marie, a strong but desperate 20-something woman and Francis, a vulnerable and inwardly tortured soul – the audience is unable to pick sides in the midst of their comical yet tragic race to Nicolas’ heart. They both possess little bits of what all of our hearts are made of.