From Mardi Gras to Mexico: (By Sea!) 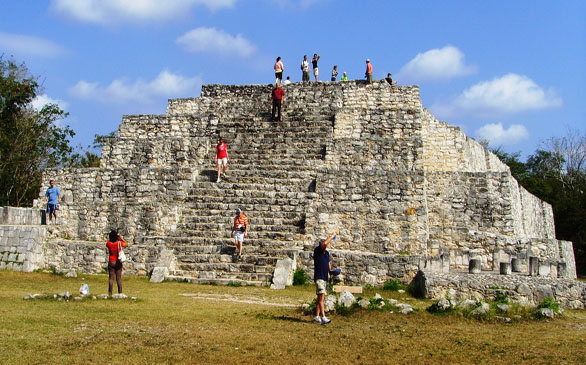 You can climb the ancient pyramids at Dzibilchaltún.

If you’d like to party with, oh, say a quarter million of your closest friends, then New Orleans during Mardi Gras is the place to be. Moderation and bashfulness seem to go right out the window in the city’s French Quarter and particularly on Bourbon Street as big-ass beers are guzzled in the middle of the closed-off street, girls flash and otherwise go wild and everyone scrambles for the ubiquitous trinket bead necklaces that are tossed from parade floats. Mix in nonstop music of all sorts being played on the street and in dozens of bars, Cajun food to die for and oh yeah, the costumes, and it’s no wonder that people come from all over the world to let their hair down for this unique event. There’s such a whirlwind of activity during Mardi Gras that it’s a little mind-boggling, but eventually the celebration wraps up and people start heading home. That doesn’t mean the fun has to end though; keep the good times rolling all the way to Mexico!

Aboard the Fun Ship: Extending a Mardi Gras visit to New Orleans into a cruise to Mexico is easier than you might think. Carnival Cruises offer a five-day jaunt that departs the Saturday after Mardi Gras from a pier that’s only minutes away from the French Quarter and Bourbon Street and returns there on Wednesday. The ship then sails for Progreso, on the very northern tip of the Yucatan Peninsula, and later to the party-hardy island of Cozumel. But first there’s a full day at sea, and that gives you time to enjoy all the amenities of what Carnival calls their “fun ship.” Slosh down the giant Twister water slide a few times before heading to an awesome all-you-can-eat buffet lunch, sip on a Coco Loco Monkey Head or two and stop by the sushi bar on the way to the casino. When it gets late the disco opens, and it won’t close until you’ve worn yourself out dancing. Just make sure you save a little energy for Mexico!

Progreso: Progreso is one of the lesser-visited ports in Mexico, and because of that you can find whatever type of beach experience you might desire, from active to quiet. A full range of diving, snorkeling and other water activities are on tap, or if you’d like to do a more touristy thing, there’s a good excursion that combines a visit to the Mayan ruins at Dzibilchaltún with a Mexican buffet and Charros show at the Tierra Bonita Ranch. At Dzibilchaltún you can actually climb on the ancient pyramids, and the show and lunch at Tierra Bonita features lots of traditional singing and dancing and horseback riding and roping demonstrations from Mexican cowboys. Lunch includes a free margarita, and additional liquor purchases afterward are very cheap.

Cozumel: The entire island of Cozumel is geared toward tourism, and that means there are endless opportunities for fun. Here, it is easy to get around and impossible to get lost, so if exploration is your thing, just get off the ship and see where the day leads you. Right near the pier there’s a shopping area loaded with places to drink and eat, you will find colorful characters here too in full Mayan garb who will pose for pictures for just a small tip. If you want to stay on land you can rent a bike, scooter or ATV and head out as part of a group or on your own, and if you want to play in the water all the common options are available, as are more unusual adventures like riding underwater scooters, riding in a submarine or putting on a space-age diving helmet for a walk on the ocean floor. Swim with rays, go deep-sea fishing, kayak, snuba or just attend the Corona beach party. Then it’s back on the ship and a return to New Orleans and Bourbon Street – I’m beginning to see a pattern here!

These short cruises are not expensive, and your favorite travel agent can generally get you the best deal.