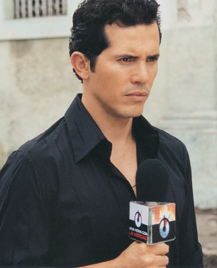 Playing egotistical Miami-based tabloid newshound Manolo Bonilla in Crónicas was a big stretch for John Leguizamo. The Colombian-American actor known for taking comedic roles in films like this summer’s Honeymooners remake took a chance by starring in Crónicas, a film that tells the story of a reporter on the hunt for a serial killer who preys on children in Ecuador.

The challenging role was the first of its kind for Leguizamo who, aside from a few excitable English outbursts, speaks mostly in Spanish throughout the film. It’s also the first project he’s worked on to feature an all Pan-Latin cast of Colombians, Puerto Ricans, Ecuadorians, Mexicans and Argentineans.

Looking comfortable in a dark blue suit and drinking his morning cup of java during the interview, Leguizamo is eager to talk about exactly what promoted this change.

"I feel that right now we’re entering sort of a Latino cinema film movement [with] Amores Perros, City of God, Y Tu Mamá También, Maria Full of Grace – all these powerful Latin movies that are influencing Hollywood in a lot of ways – and I wanted to be a part of it," he says. He’s pleased at the acceptance of this steady rise of Latino actors being thrown onto the forefront of the Anglo film market.

Once receiving the Crónicas script from producer Alfonso Cuaron, Leguizamo was immediately drawn to the film’s intellectual elements. He says he wasn’t nervous about doing a role in Spanish, but rather that he’d wanted to do one for a while. Comparing his Spanish-speaking skills to a child, he admits he had to brush up on his Spanish to make Bonilla become suave and real. He further admits to not having the subtlety in speaking Spanish like Mexican actor Damian Alcazar, who plays Vinicio Cepeda and plays head games with Leguizamo’s character.

Leguizamo left for Ecuador a month before shooting to pick up the dialect. He worked daily with a Spanish speaking coach and learned his lines two weeks in advance. Whenever he would say something grammatically inaccurate, he was quickly corrected.

"I thought I would rock it much more than I did, but it was really difficult. I underestimated how hard it was going to be and it kicked my ass," he recalls.

After watching the documentary The Panama Deception, Leguizamo began to heavily question the media’s tactics. The film exposes how the government controls what is and isn’t allowed to air. Leguizamo finds this disturbing.

"It made me very suspect of the news. But it’s good to be that way," he says. "I think media is very powerful. It gets presidents elected; it puts spin on political issues. I would love it to be that powerful if it was that objective and that truthful or you had the different sides to the issues, but when I watch the news I always feel there’s a bit of a spin."

Next up for Leguizamo: he’ll be reprising his role in Ice Age playing Sid the Sloth and he just finished filming The Alibi, in which he costars alongside Rebecca Romijn. He’s also currently working on the film Sueno, about a Mexican singer making his way in Los Angeles.